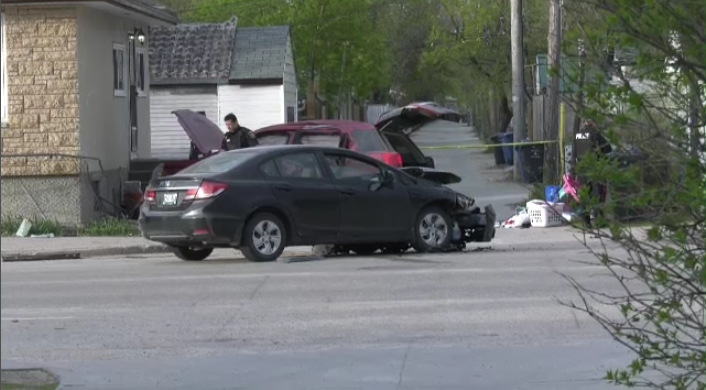 Officers with the Winnipeg Police Service on scene of the crash in the West End.

According to Winnipeg police, the two-vehicle crash took place on Wednesday morning around 3 a.m. at the intersection of St. Matthews Avenue and Ingersoll Street.

St. Matthews Avenue between Sherburn Street and Ingersoll Street was closed, but has since reopened.

At this time, police do not have information on whether anyone was hurt in the crash.

Simple advice from a friend to stay near the door may have saved Yenifer Yulisa Cardona Tomás from the deadly fate that befell 53 other migrants when they were abandoned trapped in a sweltering semi-trailer last week on the edge of San Antonio. The 20-year-old from Guatemala's capital said it was already hot on June 27 when she stepped out of the warehouse on the Texas side of the Mexico border where she had been waiting and climbed into the back of the trailer.

One of the twin brothers who was killed in a shootout with police outside a bank in Saanich, B.C., last week had applied to join the Canadian Armed Forces but was rejected, a military spokesperson confirmed Monday.

Highland Park's police chief said the 22-year-old man identified as a person of interest in the shooting that killed at least six people, wounded at least 30 and sent hundreds of people fleeing from an Independence Day parade in suburban Chicago on Monday has been taken into custody.