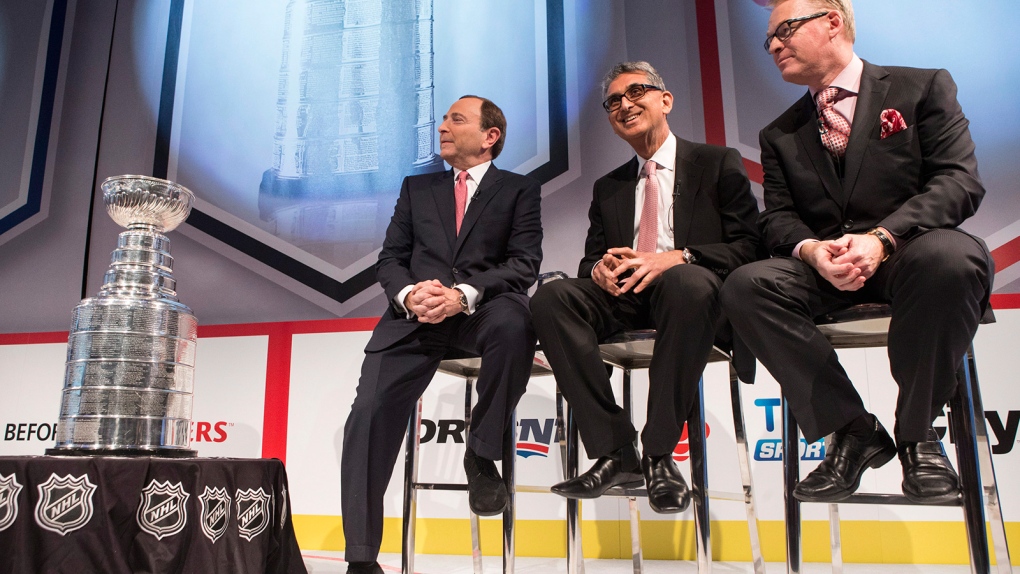 The deal, the largest in NHL history, gives Rogers national rights to all NHL games, including the playoffs and Stanley Cup final, on all of its platforms in all languages.

"It will be the NHL like never before," Rogers Media president Keith Pelley promised at a packed news conference Tuesday, touting a "transformational day" for the industry, as well as Rogers' position as a sports broadcasting titan.

A sub-licensing agreement with CBC allows the public broadcaster to continue airing "Hockey Night in Canada" on Saturday nights for four years, while TVA in Quebec earned all of the Canadian French-language multi-media rights.

But the Rogers coup includes rights to the venerable "Hockey Night in Canada" brand, allowing Rogers (TSX:RCI.B) to air the weekly staple across all of its platforms, including City and Sportsnet.

"Sometimes it's almost surreal -- acquiring the most coveted content in all of Canada, and there is nothing even close, which is the national rights to 'Hockey Night in Canada,"' Pelley told reporters after the news conference.

"And that's pretty exciting but it's daunting and overwhelming at the same time."

The agreement guarantees that there will be no further regionalization of games or local blackouts. Rogers has three exclusive windows to broadcast any game involving a Canadian team -- Wednesday nights, Saturday nights (including the weekly match-ups on CBC) and Sunday nights.

The deal is a devastating blow to rival sports network TSN and to the beleaguered CBC, which gives up lucrative hockey revenues that have traditionally subsidized its slate of original Canadian programming.

And even though "Hockey Night in Canada" will continue to be a staple, it's likely to undergo a radical new look.

"From next year on, the content of that show, whatever features are being done, that's a Rogers responsibility and you know what, it's kind of fair, they just paid $5.2 billion for 12 years for that," CBC president Hubert Lacroix said following the announcement.

He outlined the shift in an internal memo to staff, noting that "starting next year, Rogers will assume all editorial control (all editorial decisions with respect to the content, on-air talent and the creative direction of HNIC -- we have the right to be consulted and there is a commitment to excellence) under the new agreement."

He added that it wasn't "the outcome we had hoped for," confirming there will be job losses, though not as many as there would have been had they lost the NHL altogether.

Lacroix said at the news conference that the NHL had high financial expectations and the CBC was "not in a position to spend taxpayers money on this game of high stakes."

While CBC will no longer make money from "Hockey Night in Canada," Lacroix said airing the games will still be good for the public broadcaster.

"We think the ability to still have 'Hockey Night in Canada' is something important to us ... and that's what we get out of this," he said.

He notes the deal allows CBC to promote its programming in primetime across all Rogers networks, giving homegrown series unprecedented profile to reach new audiences.

Nevertheless, Lacroix acknowledged that lucrative hockey profits will no longer be available to help fund original series such as "Republic of Doyle" and "Mr. D."

He said discussions were underway to possibly generate income in other ways, should CBC partner up with Rogers in the production of "Hockey Night in Canada."

"Then if they use some of our resources -- and we have different agreements going on right now -- it will be something that will either be paid in kind or in services or in cash."

The ramifications of the deal are myriad and ongoing. For example, Pelley floated the possibility of CBC newscasts airing on City, for example, after a game.

The deal also is raising questions about the future of CBC's talent, especially Don Cherry. Pelley said it was too soon to answer those questions.

"Over the next months and years, we will evaluate all facets of our production and our programming, certainly in consultation with CBC regarding 'Hockey Night in Canada,"' said Pelley.

In his internal memo, Lacroix said the CBC had been in conversation with the league for several months.

TSN will be severely impacted by the blockbuster agreement, although it still has some regional deals.

"We congratulate the NHL on this announcement," said Bell Media vice-president of communications Scott Henderson. "We submitted a bid we believed was valuable for the NHL and appropriate for our business, but were ultimately outbid."

Henderson said TSN would have 10 Leafs games next season under a regional agreement and that, starting in 2015, the network would have 26 regional Leafs games. TSN also has a deal for over 60 regional Jets games through 2021.

The deal could put the iconic "Hockey Night in Canada" theme song in limbo. TSN has owned the rights to the jingle since 2008 after CBC was unable to negotiate a new agreement with the song's composer.

Pelley said he couldn't comment on the song except to say it's not part of the deal "for obvious reasons."

Rogers CEO and president Nadir Mohamed said the new agreement makes sense for Rogers, which has made sports investments a priority.

"We've had a focus on sports for the last few years," he said. "I talked about the investments we've made, whether it's the Jays, the MLSE, investment, The Score, regional rights to hockey. So really, in some ways, this is the icing on the cake."

"Categorically this is positive for shareholders at Rogers," he added. "It's a financially good deal for us."

The deal is subject to approval by the NHL board of governors, which meets Dec. 9 and 10 in Pebble Beach, Calif.