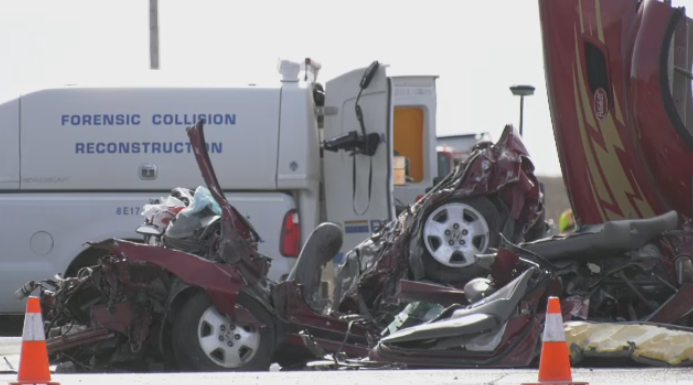 A 19-year-old man from the R.M. of Rockwood was killed after his car collided with a semi at the intersection on Oct. 25. (Source: CTV News Winnipeg)

WINNIPEG – The province is slowing down traffic and restricting movement at an intersection some have called for the closure of, after a 19-year-old was killed in a crash there in October.

It said the corner itself will close in a year.

The province said at this point, it can’t close turn off to Brady Road from the south Perimeter Highway, because it is a major entrance to the City of Winnipeg’s landfill, visited by 800 vehicles a day.

However it said immediate changes are coming: the speed limit on the Perimeter on either side of Brady will be reduced to 80 km/h; a deceleration zone will be created on the paved shoulder west of the Brady Road turnoff; and drivers will no longer be able to turn left onto the Perimeter from Brady.

Message boards and speed reader boards will go up, temporarily, to remind drivers of the changes when they are approaching the turnoff.

“We understand these changes may be disruptive to some drivers,” said Infrastructure Minister Ron Schuler in a news release announcing the changes. “But we are still seeing too many collisions and near-misses in the area and need to take further steps to make the area safer in the interim while we build toward a long-term solution.”

An online petition calling for the closure of the intersection has more than 1,700 signatures. Lesley Shepherd, an organizer and family friend of the 19-year-old who died, Ethan Boyer, had told CTV News traffic could be rerouted to a controlled intersection at Waverly, via an access road that runs parallel to the Perimeter.

After hearing of the province's proposed changes, she said she spoke with members of Ethan's family.

"I can tell you that we are all pleased that it has started and things are happening," Shepherd said. "I think it’s a really good start. A lot more needs to be done, and hopefully they will continue to do that in the next year.”

Shepherd said she believes these changes are coming because the support the petition had.

"It was less than a week and we had close to 2,000 signatures. I think the province saw that and reacted to what the public wanted and needed," Shepherd said. "Ultimately, of course, we would like to see that entrance to Brady as a controlled intersection. Public safety is paramount and (the intersection) has proven itself to be very dangerous."

The province said the long-term plan is to close the corner by fall of 2020, and planning is underway for a permanent service road that runs off of Waverley. It said the dirt service road that already exists wasn’t built for heavy truck traffic or poor weather and “is not a safe or suitable replacement.”