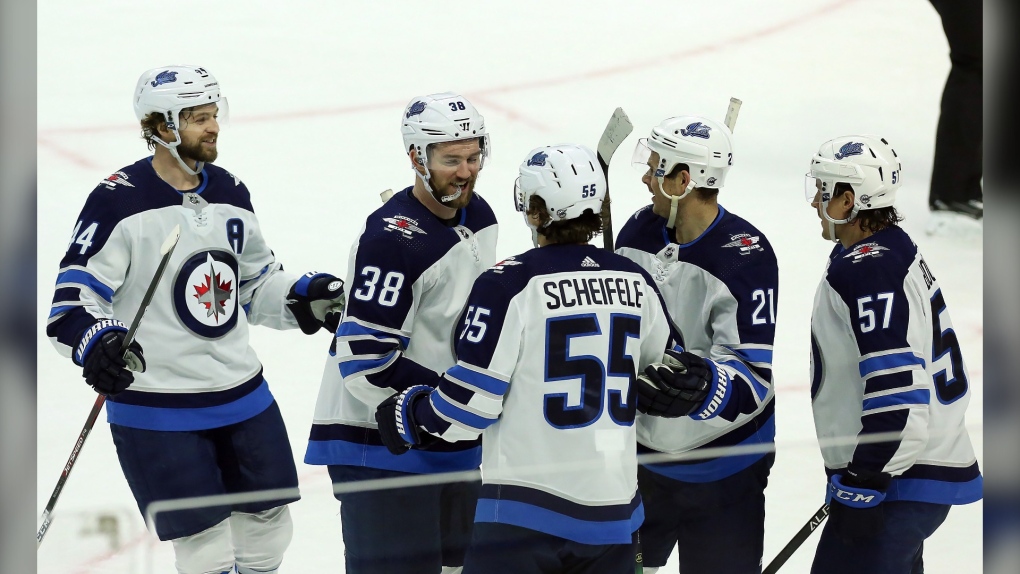 OTTAWA -- Mark Scheifele broke out of a slump in style Thursday night, scoring three power-play goals to lead the Winnipeg Jets to a 5-1 win over the Ottawa Senators.

The Jets centre hadn't scored in 12 games coming into the night, but said he wasn't overly concerned about that drought.

"You continue to work on your game whether you're scoring or not, but like I said before the main focus here is winning games."

The Jets (32-25-5) moved into the first wild-card spot in the Western Conference as the St. Louis Blues blanked Arizona 1-0. The Jets were one point up on the Coyotes and have a game in hand.

Kyle Connor and Nikolaj Ehlers also scored for the Jets, who are 7-2-1 through their last 10 games. Laurent Brossoit made 29 saves for his sixth win of the season.

"We just didn't play smart enough," said Senators coach D.J. Smith. "We turned a lot of pucks over. I didn't think we got to their net nearly enough. We've got to be a little bit harder offensively."

Newly acquired Jets defenceman Dylan DeMelo faced his former teammates while playing his first game win Winnipeg. The Senators traded DeMelo to the Jets Tuesday night in exchange for a third-round pick, but rather than joining the team in Winnipeg waited for them here in Ottawa.

DeMelo made a great first impression on his new coach with his solid, simple style of play.

"Coaches love those kinds of games. It's not flashy, but his consistency with his stick, his reads and his passes. The ones he needed to snap hard he did and the ones he could feather and touch in there he did. That was a real complete, kind of quiet game the coaches will love."

DeMelo said it was a little strange to line up against his former teammates, but he liked what he saw from the Jets.

"I was obviously impressed with our team," said DeMelo. "I think we've got a really good group of guys in here. Once we got settled in and played our game the power play came up huge with a couple goals and then we really found our game and you can tell the guys can make some plays out there."

Trailing 4-1, the Senators pushed back in the third, but were unable to find a way to beat Brossoit again.

Frustration seemed to settle in for the Senators in the third as Brady Tkachuk and Jean-Gabriel Pageau got involved physically. Scott Sabourin took a misconduct while on the bench as he sprayed water at Scheifele.

Scheifele made it a hat trick when he scored his third power-play goal late in the period.

The Jets extended their lead early in the second as Connor won the battle for position in front of the net and jammed home a loose puck.

Winnipeg made it 4-1 just over a minute later as Ehlers beat Ron Hainsey to a rebound in front and put it past Hogberg.

Paul opened the scoring midway through the period with a wrist shot from the slot to give the Senators a 1-0 lead.

"Starting to feel confident," said Paul, who scored his eighth of the season. "Feeling good with the puck and just ended up trying things. I work on my shot a lot."

Scheifele gave the Jets a 2-1 lead, scoring two power-play goals in a span of 1:11 to hit the 25-goal mark for the year.

Ottawa's Drake Batherson was involved in his first NHL fight in the first period when he dropped the gloves with Winnipeg's Jansen Harkins.

This report by The Canadian Press was first published Feb. 20, 2020.