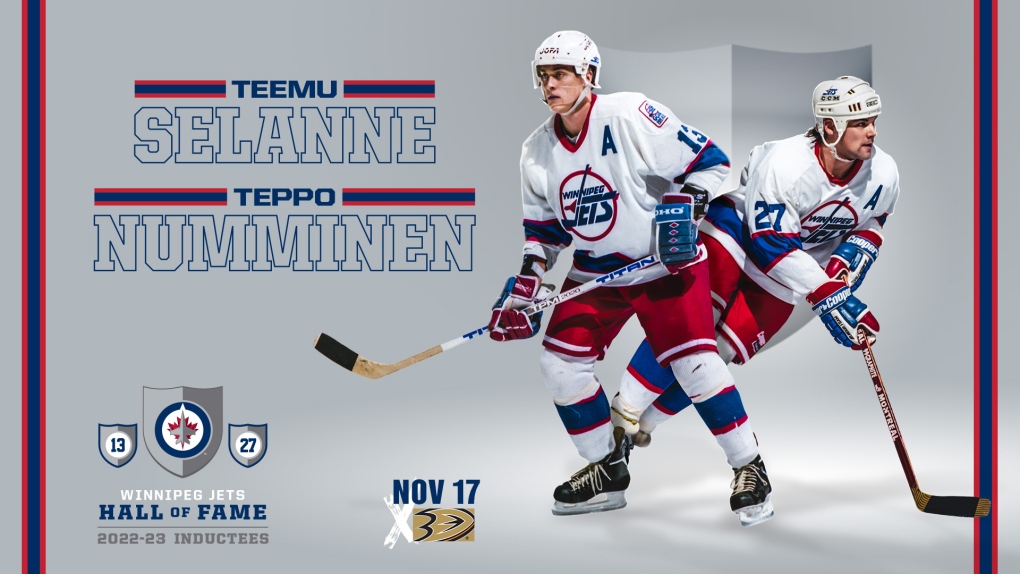 The Winnipeg Jets will be adding two new members to their Hall of Fame this upcoming season.

The organization announced Wednesday that Teemu Selanne and Teppo Numminen will become the ninth and tenth members of the Winnipeg Jets Hall of Fame.

"Teemu and Teppo have made indelible marks as part of Winnipeg Jets history and have deep connections to the city and with Winnipeg fans," said Mark Chipman, the executive chairman of the Jets, in a news release.

"We are excited and honoured to celebrate their outstanding achievements as Winnipeg Jets and make our admiration and gratitude official with an induction in the Winnipeg Jets Hall of Fame.

The two will be celebrated at a gala on Nov. 15. A ceremony will be held before the game against the Anaheim Ducks on Nov. 17 and both players will have their banners raised to the rafters.

"Winnipeg gave me my start in the NHL and holds a special place in my heart," Selanne said in a news release. "I have a lot of great on-ice memories from my time playing in the city, but equally as many off-ice memories in a community that has made me feel like one of their own since day one. I feel beyond privileged to be recognized by the Jets in this way, and to do it alongside my good friend Teppo is a true honour."

"I couldn't have asked for a better city to play the first eight years of my NHL career in, and to be recognized in front of the same passionate community that made playing hockey a treat every single night will be an unforgettable moment for my family and I," Numminen said in a news release.

Selanne and Numminen will be joining the likes of Bobby Hull, Ulf Nilsson, Anders Hedberg, Dale Hawerchuk, Ab McDonald, Lars-Erik Sjoberg, Randy Carlyle and Thomas Steen who are all part of the Jets Hall of Fame.

The OPEC+ alliance of oil-exporting countries on Wednesday decided to sharply cut production to support sagging oil prices, a move that could deal the struggling global economy another blow and raise politically sensitive pump prices for U.S. drivers just ahead of key national elections.

OPINION | Richard Berthelsen: Where will the King and Queen Consort live on a day-to-day basis?

In just over three weeks, everything in royal life has changed. In an exclusive column for CTVNews.ca, royal commentator Richard Berthelsen explains how.