WINNIPEG -- A Winnipeg shelter is warning of the ‘unintended consequences’ the city will now face after RCMP seized more than 20 kilograms of meth during an organized crime bust.

On Dec. 4, 150 RCMP officers carried out the largest meth bust in the province’s history. About $6.5 million worth of cocaine and meth were seized, and 11 people were arrested.

To put this seizure in perspective, RCMP said the amount of meth seized translates to roughly 220,000 hits on the street.

But Main Street Project is concerned this massive bust will have impacts on those addicted to the drug.

“I don’t want to take away from what was great work, but we do have to, from our perspective, be aware of some of the unintended consequences,” said Rick Lees, executive director of Main Street Project.

Lees said removing this amount of meth from the street could push those addicted to the drug to create a “home-grown industry” of more dangerous meth, or move to lesser-known substances like opioids.

“People who are chronically addicted to meth will find new and innovative ways to replace it,” Lees told CTV News. “The question is, are they replacing it with something that is perhaps more dangerous?”

Lees said he doesn’t want to minimize the great work RCMP did in this bust, but he said the system needs to be ready for what comes next.

Lees said right now about 50 per cent of the people in Main Street Project’s detox facility are there because of meth.

“It’s an insidious drug that really captures and holds people to it,” Lees said.

Lees said he hopes people will see this bust as an opportunity to stop using the drug and seek help to taper off it.

He said the system needs to be prepared for both the education and the treatment of those addicted to meth.

“It’s a great win, but certainly we have to make sure the rest of the system is there and ready for the consequences.” 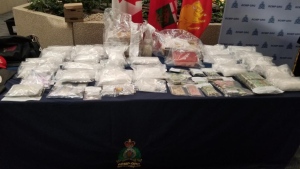