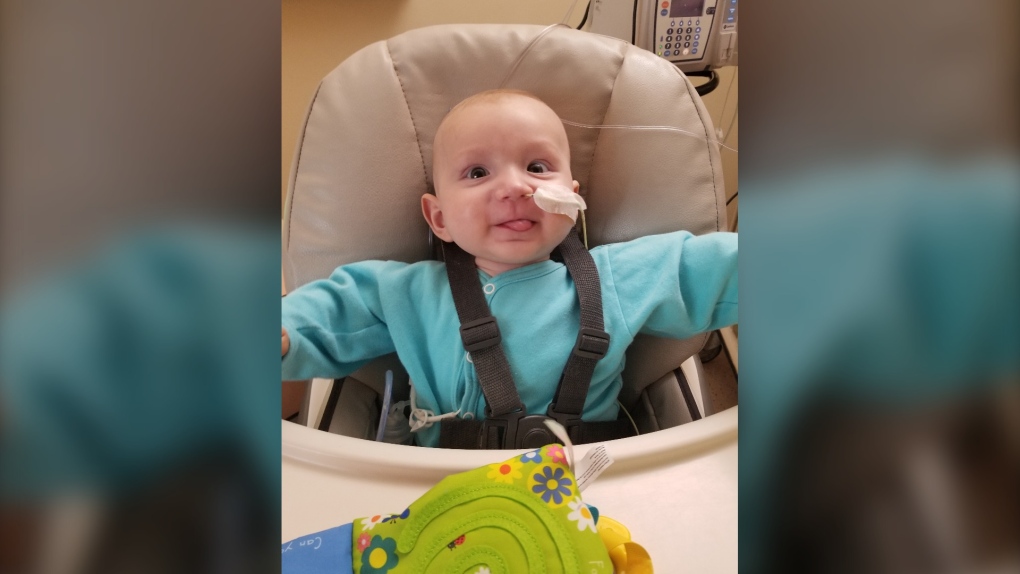 Baby Felix is shown after his surgery at Toronto's Hospital for Sick Children is a handout photo. THE CANADIAN PRESS/HO-Julie and Paul Devigne

WINNIPEG -- Hope dwindled for Julie and Paul Devigne as a treatment-resistant tumour in their baby's belly swelled so large it restricted his ability to eat, sleep and breathe.

Then, in a surgical feat, doctors at Toronto's Hospital for Sick Children gave little Felix another shot at life, say the Winnipeg parents.

During a more than six-hour-long procedure, a cross-disciplinary team of eight medical workers removed the 1.3 kilogram mass -- nearly three pounds -- from the infant's body, defying some experts' opinions that the tumour was inoperable.

"It's very hard to put into words the gratitude that we have," said Paul Devigne. "(We want) to give anybody out there who's in a similar situation where they're running out of options a glimmer of hope."

The Devignes had their first child on July 16, 2020. And aside from the peculiarities of raising a newborn during a pandemic, they said Felix seemed to be coming along just fine.

But at around four months old, Felix became crankier than usual, said Julie Devigne. He wasn't sleeping well, and eventually, wouldn't let his parents put him down.

She took him to the emergency room at Winnipeg's Health Sciences Centre to see if he had a urinary tract infection.

After a battery of tests, doctors told her Felix had a tumour in his abdomen. He was later diagnosed with rhabdomyosarcoma, a type of soft tissue cancer that mostly affects children.

"It was like I was in a movie," Julie Devigne said. "This can't be happening to us."

Felix spent months in hospital undergoing chemotherapy. But the tumour continued to grow until it filled most of his abdominal cavity, displacing several vital organs, including his kidneys, liver and bowel. The pressure from the mass also impeded his lungs.

"We were starting to run out of options and hope," said Paul Devigne. "It was probably the worst time of our lives."

The Winnipeg oncologists treating Felix started reaching out to medical facilities with the expertise needed to remove the tumour.

When Felix's file found its way to Dr. Blayne Amir Sayed at SickKids, the surgeon was taken aback to see such a large tumour in such a small child.

"We certainly don't see (tumours) like this very often in children Felix's age, at such a huge size and rapid growth," said Sayed, the hospital's surgical lead for pediatric liver transplantation.

"This would be something you would read about in a case report in the medical literature every 10 to 20 years."

Sayed said he consulted with peers across North America and some said they wouldn't attempt surgery.

But Sayed said he and his colleagues at SickKids -- experienced in complex pediatric cases -- decided it was worth a shot.

Sayed said he knew the surgical team was in for a challenge.

The tumour was roughly 15 per cent of Felix's body weight. It would take painstaking precision to remove it without damaging any organs or veins, said Sayed. Doctors also suspected that the urinary tract, which is where the tumour arose, would require significant reconstruction.

Sayed said the tumour had also given rise to an intricate "vascular web" that meant one wrong incision could result in major blood loss.

The tumour was obstructing Felix's vena cava, a large vein that carries blood back to the heart. Sayed said this resulted in a circulatory "traffic jam," with blood be rerouted through small vessels that become increasingly engorged.

Moreover, the tumour had "parasitized," which meant it was stealing blood supply from nearby tissues to support its rapid growth, he said.

"This was really a kind of meticulous dissection," he said. "There are significant risks, and those include death."

On the morning of Feb. 4, the Devignes sent six-month-old Felix into the operating room, and tried not to think about the worst outcomes.

"It was very hard saying goodbye to him, because we weren't sure what was going to happen," Julie Devigne said.

Hours later, a nurse called to say surgeons had remove the entire tumour. The Devignes cried, "happy tears of joy."

Sayed said he feels optimistic about the long-term prognosis.

"For the amount of surgery that he went through, he did terrific," said Sayed, adding that doctors will have to monitor for potential signs of recurrence.

Now back home in Winnipeg, Paul Devigne said he's adjusting to a slower pace of life after spending so many months in "survival mode."

Julie Devigne said Felix has some catching up to do in terms of development, but he's making gains by the day. Earlier this week, he rolled onto his stomach for the first time, and now he won't stop.

The Devignes said they owe a debt of gratitude to all of the health-workers who never gave up on Felix.

"It was pretty much giving him another chance of hopefully living a good life," said Julie Devigne.

This report by The Canadian Press was first published April 22, 2021.