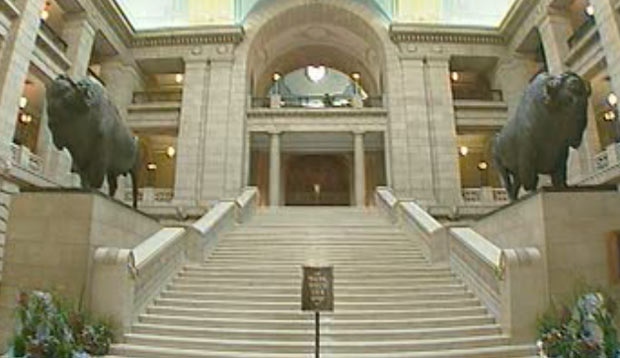 Overall, the government has yet to implement 14 of the 29 recommendations from the auditor's 2006 report, including regular analysis of financial reports from the four authorities that oversee child welfare agencies, said the auditor general. (file image - Manitoba legislative building)

WINNIPEG -- Manitoba's auditor general says child welfare in the province continues to rely on an outdated central database, an incomplete child abuse registry and other problems first pointed out six years ago.

"Unfortunately, progress has been slow in a number of areas, including recommendations aimed at ensuring an effective central information/case management system," Carol Bellringer wrote in a 56-page report released Wednesday that details the government's response to an audit her office did in December 2006.

The audit found that the Child and Family Services Information System -- the central database used by social workers -- had missing or old information on children in care and wasn't being used by some workers.

In her new report, Bellringer noted the Family Services Department asked the NDP government in 2009 for funds to look at, among other things, a replacement system.

"The request for funds was denied by Treasury Board," Bellringer wrote.

The report also said there's been little progress in ensuring people convicted of child abuse are entered into a provincial registry, which officials scan when vetting foster parents.

The Manitoba government has attempted to have Crown attorneys and other court officials fill out a new standardized form to quickly report child abuse convictions, but "we were told that challenges continue regarding the proper completion and submission of the form."

Overall, the government has yet to implement 14 of the 29 recommendations from the auditor's 2006 report, including regular analysis of financial reports from the four authorities that oversee child welfare agencies.

"The department is in the process of building its staffing capacity to analyze the financial reports," Bellringer wrote.

The NDP defended its record Wednesday by saying it has poured money into child welfare, but has focused on front-line care rather than administrative tools.

"All of (the recommendations) are in progress and we're working on all of them, but we will continue to priorize the work that speaks directly to the safety of children."

Since 2006, the government has added 230 new positions in child welfare and has helped fund 5,000 new foster care and emergency shelter spaces, Jean-Marc Prevost, Howard's press secretary, wrote in an email.

Manitoba's child welfare has been in turmoil for much of the last decade. The number of children in care has almost doubled in that time and stood at 9,432 as of last year.

The government's move to transfer control to aboriginal-run authorities in 2004 created tension and uncertainty among workers, while growing caseloads made it harder to prevent kids from falling through the cracks, according to recent testimony at an inquiry into the death of Phoenix Sinclair.

Sinclair was beaten to death at the age of five -- several months after she was removed from a foster home and returned to her mother, Samantha Kematch. The girl's death went undetected for nine months. Kematch and her boyfriend were later convicted of first-degree murder.

In another case, two-year-old Gage Guimond was given to his great-aunt, Shirley Guimond, despite the fact she had a criminal record. The boy was beaten frequently and died after falling down stairs.

In 2010, the children's advocate office warned that child welfare in the province was in "a state of chaos" characterized by high case loads, a lack of resources and mistrust among foster parents who felt they were not properly supported.