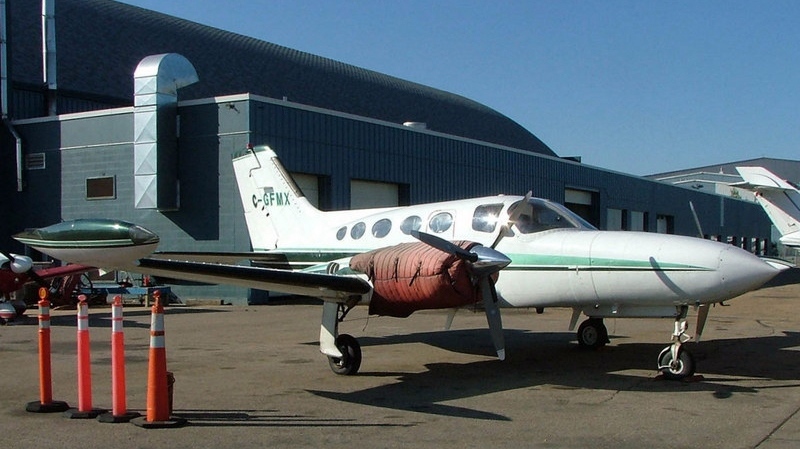 A Cessna 421 (not the one that crashed) is pictured above. (File image)

PHILLIPS, Wis. -- A small airplane that went down in northern Wisconsin fell apart in the air, killing the six people on board, a spokesman for the National Transportation Safety Board said Monday.

The Cessna 421 that crashed at 3:21 a.m. Saturday left from Waukegan, Illinois, and was flying to Winnipeg in the Canadian province of Manitoba, NTSB spokesman Eric Weiss said.

The debris field from the crash stretched about a quarter of a mile from a heavily wooded area onto a state highway, Lt. Gabe Lind at the Price County Sheriff's Office said.

The DeMauros and King were from Bensenville, Illinois, and Francis from Norco, California. Charles Tomlitz was from Addison, Illinois, and George Tomlitz from Brookfield, Illinois. Authorities did not say how they knew each other or how the DeMauros were related to each other.

NTSB investigators say the pilot of the plane and air traffic controllers had a discussion about "local weather phenomenon" in Catawba, Wisconsin, shortly before the crash. Soon after, the aircraft dropped off radar. Catawba is near the crash site just southwest of Phillips.

Several things can contribute to planes falling apart in the air, including flying into extremely cold air or a cabin fire, said Don Knutson, who runs an aircraft accident investigation business. He said severe weather that causes "spatial disorientation" of the pilot also could be a factor in such incidents. This is when the pilot overstresses the aircraft with aggressive manoeuvrs in an attempt to right the plane, Knutson said.

Weiss said investigators are still trying to determine what type of weather the plane encountered and whether it caused the crash.

Thomas DeMauro was a physical education teacher at Tioga Elementary School in Bensenville, Illinois, and Charles Tomlitz was a maintenance director for the district, according to a Facebook post from the school.

"Mr. DeMauro and Mr. Tomlitz will be missed by all the Tioga Community," the school's co-principals wrote in the post on the Tioga Elementary School Facebook page.

In a statement to WSAW-TV, the DeMauro family expressed gratitude for the outpouring of support.

"We would also like to express our heartfelt condolences to the other families affected by this tragedy. Tom was our beloved son, husband, father, brother, uncle, friend, teacher and coach," the statement said. "Kyle was our dear son, brother, grandson, nephew and friend; a compassionate young man who had a promising future."