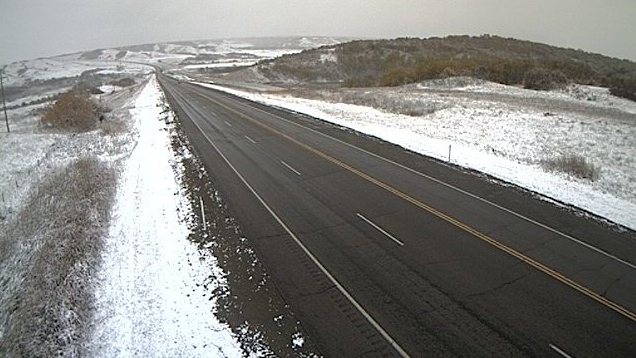 Snow has fallen along Highway 16 near Russell. (Source: Manitoba 511)

Environment and Climate Change Canada has issued a snowfall warning for several regions in the south. It said snowfall accumulations are highly uncertain given the rain/snow mix and surface melting.

However, Environment Canada said it seems likely that the area west of Winnipeg and east of Brandon will see around 10 cm wet snow on the ground by Thursday evening. The rain/snow line will push further east Thursday night, and Winnipeg should see 5 cm of snow by Friday morning. Areas further west are in for higher snowfall totals.

Environment Canada said areas under a snowfall warning should expect 15 to 25 cm by Friday morning.

A special weather statement is also in effect through most of southern and central Manitoba.

The weather agency said a cold front pushing in from Saskatchewan will bring cold temperatures with rain or snow Wednesday. Accumulating snowfall from the southwest corner of the province into the Red River Valley and northwestward toward Berens River is expected into Thursday. About five cm of snowfall is likely by Thursday night.

“Currently, it appears regions in the Red River Valley and eastward will see a transition from rain to snow Thursday. However, exact position and timing of the transition is still uncertain, so the precipitation amounts and type in the forecast may change as the system develops,” the special statement reads.

Snow and strong winds are expected to last through the Thanksgiving weekend.