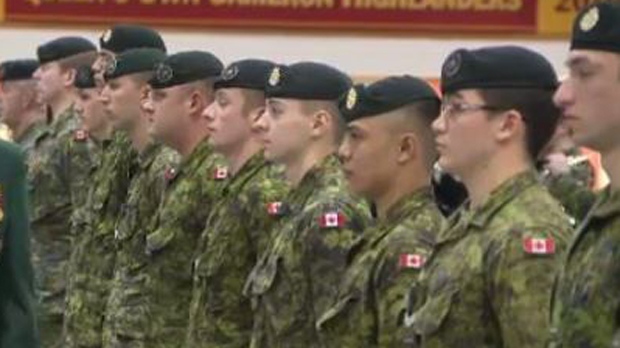 The Winnipeg Infantry Tactical Group consists of the Royal Winnipeg Rifles (pictured) and the The Queens Own Cameron Highlanders of Canada. (File image)

Soldiers in Winnipeg will conduct a 13-kilometre march and shooting competition northwest of the city on Sunday.

Soldiers are holding a march and shoot competition in memory of Wayne Nicholson, a master warrant officer who passed away from cancer.

“He was quite a strong member of our unit. He’d been with us for 13 years,” said Lt.-Col. Sean Moran, with the Winnipeg Infantry Tactical Group. “He was a very fit guy, and a master sniper. We felt a huge loss.”

The group will carry rifles during the march, but the weapons won’t be loaded outside the secure St. Charles Range.

They left from the gate at St. Charles Range around 8 a.m. and will march west on Saskatchewan Avenue for about 6.5 kilometres and then back.

The competition portion includes teams of four doing 4-kilometre laps around the range, shooting targets along the way.

It helps prepare the soldiers to fight under tough conditions.

“Infantry need to be prepared to march and fight. It conditions you, because you’re marching with a heavy pack, and at the end of it you need to be able to fight,” Moran said. “You can imagine you’re pretty tired.”

The event finishes around 3 p.m.