'Something has to stop in our city': Vigil held for victim of random stabbing on Winnipeg Transit bus 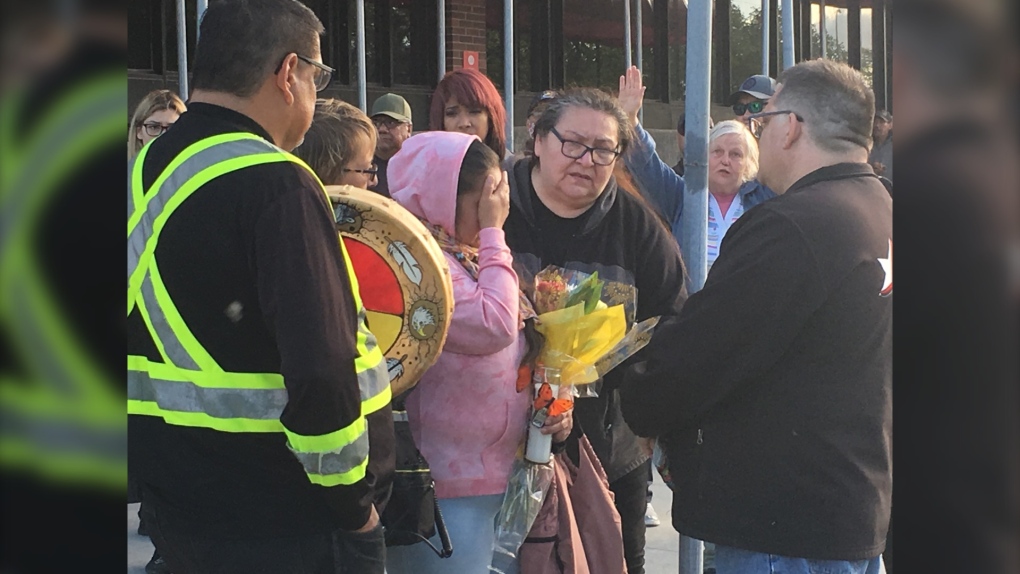 WINNIPEG -- Dozens of people gathered for an emotional vigil Friday evening in honour of Raymond Wesley Hill. The 57-year-old was stabbed in a random attack on a Winnipeg Transit bus on May 24 and later died in hospital.

“He was always there for us,” said his 22-year-old daughter, Cree-Anne Hill. “He didn’t have much, but whatever he had, he would help us.”

Family and friends gathered at Colony Street and Ellice Avenue, the corner where Hill was killed in what police are calling an unprovoked attack.

“I won’t get to hear his voice anymore,” said his former wife Nana-Gale Fagnan. “I wish I kept a recording of him on my phone.”

Hill’s family says they organized the vigil to honour his memory and to bring attention to the spike in violence in Winnipeg.

“Something has to stop in our city,” said Fagnan. “He never deserved this and it breaks my heart,” said Cree-Anne. “You can’t even take the bus, without having your back turned.”

Officers say another passenger picked a fight with Hill, which escalated. The suspect allegedly pulled out a knife and fatally stabbed him. The two didn’t know each other, according to police.

HILL HAD FALLEN ON HARD TIMES ACCORDING TO DAUGHTER

Cree-Anne, Hill’s oldest daughter, said her father was a residential school survivor, who had recently become homeless. She said he would often stay at Siloam Mission and had many friends in the city.

“Whenever we were out walking, people would always stop and say, “Hi Ray.” She and her two young daughters live on Split Lake First Nation and would often visit Hill in Winnipeg. “My dad was an amazing person,” she said. “He was always there for us.”

Longtime friend Belinda Vandenbrock described Hill as a “kind and gentle soul.” The two met as children, growing up in Churchill. “He was never one to pick a fight.”

Vandenbrock said Hill was known for his sense of humor and his devotion to his children and grandchildren.

“He was quite the character,” said Vandenbrock. “Raymond was a man who loved his family no matter what happened. His kids and grandchildren meant everything to him.”

Cree-Anne said the family will hold a private service for Hill Saturday. They plan to fly his body to Hill’s hometown Churchill. He leaves behind his daughter, a 19-year-old son and two granddaughters.