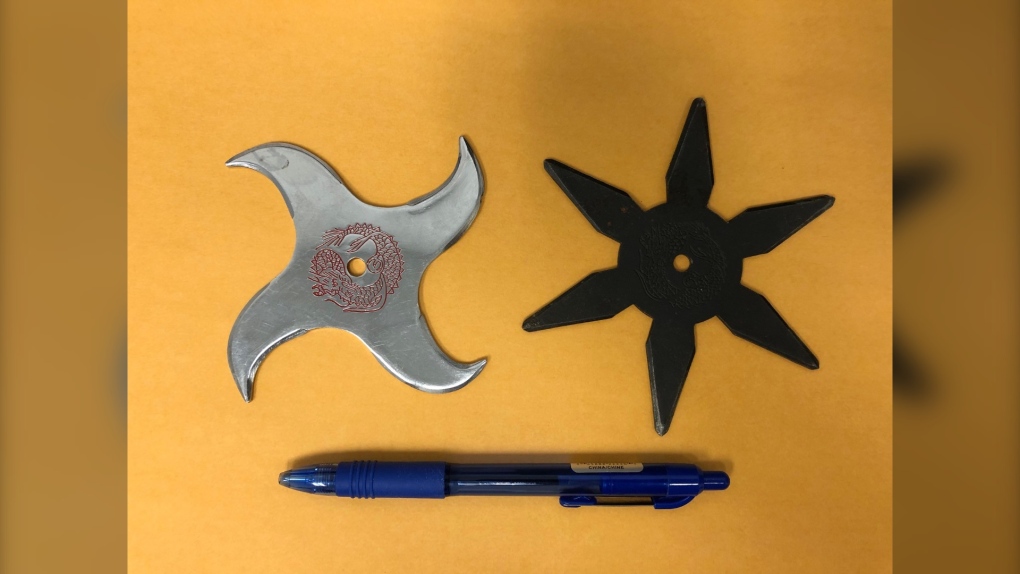 The ninja-style throwing stars that were thrown at police. (Source: Brandon Police Service)

The incident began around 2:30 a.m., when the Brandon Police Service responded to a report of a woman with multiple upper body stab wounds.

According to police, the woman told officers her neighbour was responsible for the assault.

Police went to the home in the 100 block of 4th Street and, while outside, made contact with the suspect, who was in an upstairs suite.

Officers allege the suspect, a 27-year-old man, threw ninja-style throwing stars at the officers. Police add the man then tried to flee the scene, and in doing so, threw a knife at the officers.

Police chased after the suspect and arrested him.

The 27-year-old was taken into custody and was scheduled to appear in court on Wednesday.

The Brandon police’s major crime section is investigating the incident.

Jeremy MacKenzie, the founder of the online group "Diagolon," was arrested in Nova Scotia on Wednesday on charges related to an allegation of assault in Saskatchewan from last year.

Nearly a year after a mandatory COVID-19 vaccination policy was implemented for the Canadian Armed Forces, 299 members have been kicked out of the military because they refused to get vaccinated.

The owner of the Vancouver Canucks has responded to bombshell allegations that he abused his children, which were heard during a family court proceeding this week.

How some organizations are reducing food waste and saving Canadians money

Millions of tonnes of edible food are being thrown away, a problem some organizations are trying to prevent through programs aimed at reclaiming food and giving it to Canadians at a lower cost.

Gov. Gen. Mary Simon placed tobacco Wednesday on the graves of some of the people who died in a stabbing rampage on the James Smith Cree Nation earlier this month.

A 26-year-old woman injured in a stabbing rampage on James Smith Cree Nation says she doesn’t know why she was attacked.