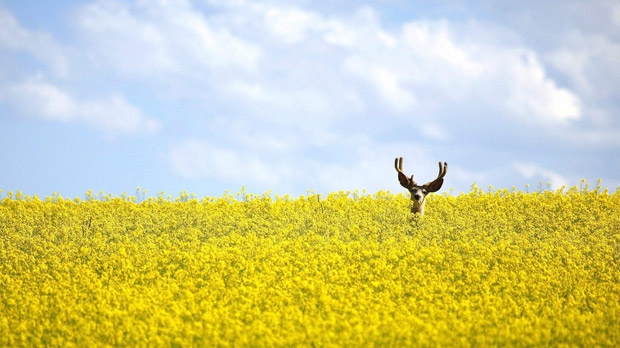 A stag stands in a neck high field of canola north of Cremona, Alta., on July 31, 2011. THE CANADIAN PRESS/Jeff McIntosh

The agency said in its latest crop estimate released Wednesday that Prairie farmers anticipate a record 15.2 million tonnes of canola -- surpassing the record of 14 million tonnes set in 2011.

"Overall, weather conditions in the West in 2012 have been closer to normal, following two years of excess moisture conditions in parts of Manitoba and Saskatchewan," says the report.

There is talk among farmers and producer groups that it could be a bumper crop. Add that to a crippling drought withering fields south of the border and pushing up prices.

"From a historical point of view, that size of crop we would see maybe once in a decade or so," said Bruce Burnett, a Winnipeg-based weather and crop specialist for the Canadian Wheat Board.

The board, which recently branded itself CWB after losing its monopoly on the sale of Western wheat and grain, says production of the six major grains and oilseeds could yield 51.6 million tonnes this year -- better than the five-year average by about four million tonnes.

But Burnett is also cautious.

"You're always a bit reluctant to call it a bumper until you get the crop in the bin and we do the final counting on it, but generally speaking, you know prospects are good, and because of the drought in the U.S. prices are high."

Kevin Bender, president of the Western Canadian Wheat Growers Association, said he's about two to three weeks from starting harvest on his central Alberta farm near Bentley. Bender, his father and brother grow barley, canola and wheat on about 1,800 hectares.

The wheat and barley look good, he said. The canola looks good, but it can surprise you "once you get into it."

Bender knows some people are talking about having a good yield this year, but he's cautious too.

"Potential I guess is there for a bumper crop, but I'm not sure it's going to be quite as good as everyone had thought or hoped earlier on. There have been some disappointing yields come in from some of the early crops anyway," he said.

"Where we are, I think we're going to have above-average crops, but I certainly don't think it's going to be our best crop. I know we do have some that's not going to be really great because some of it flooded out early on."

Bender also noted that weather is still a fickle factor.

"Frost certainly could really impact quality right now and hail still could. Hail likelihood is less. It's decreasing once we're into the end of August, but that's still a possibility. But frost would probably be the most detrimental," he explained.

"If we can make it another couple weeks here, that'll mitigate that risk considerably."

On his farm near Grenfell, in southeast Saskatchewan, Ryan Maurer knows all too well about wet weather. Much of his farm was flooded in 2010 and 2011.

Maurer said he's still fighting a lot of moisture and doesn't think there will be many bumper crops in the area.

Still, Maurer hopes to harvest about 10 to 15 per cent above average for the area. His hard red spring wheat is a semi-dwarf variety that he said is "standing well."

"We'll see when we get in with the combines, but I'm hoping that it's good quality."

Maurer said he's in a better mood this year than last because the fields are firmer and his equipment hasn't become stuck.

"It is better than last year, but other parts of the province probably have better crops than we do.

"But you know what? Not everybody gets a bumper crop every year."

In the east, farmers in Quebec say they expect a record production of 813,000 tonnes of soybeans -- surpassing the previous record of 807, 000 tonnes set in 2010. StatsCan says the new record would occur despite an anticipated drop in harvested area.

The July farm survey of crop production covering about 15,000 Canadian farmers was conducted from July 25 to August 1. Final production estimates for 2012 will be released December 5.