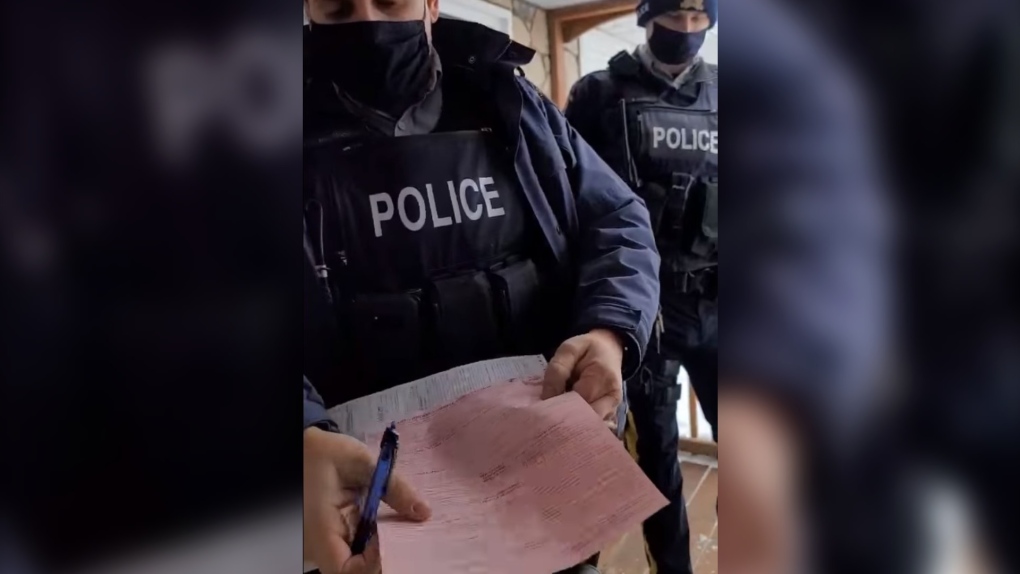 WINNIPEG -- A Manitoba minister who has previously been fined for publicly defying health orders has been handed another ticket.

Minister Tobias Tissen of the Church of God Restoration, located 15 minutes south of Steinbach, was handed yet another ticket this week for speaking at a rally in December.

Tissen has previously been handed at least two other $1,296 tickets for attending an in-person church service and attending at an anti-mask rally in Steinbach in November 2020. Tissen had been one of the speakers at the Steinbach rally.

"I'm not discouraged by my fines," Tissen said in a video posted on his personal Facebook page on Wednesday evening.

"I'm just encouraged. There is not going to be enough fines out there for them to stop me from worshipping God and exercising in the religious freedoms that God has made available to humanity."

Tissen posted a video on Wednesday evening of two RCMP officers and two officers from Manitoba Justice who handed him the ticket at his home. In a written post on Facebook following the incident, Tissen compared the RCMP and Manitoba Justice Officers to the Gestapo, saying he and others fined for similar reasons are in a 'Holy war.'

Tissen said the ticket is in relation to a rally held at the Manitoba Legislative Building on Dec. 20, 2020, which protested health orders that limited gatherings over the holiday season.

A spokesperson for the province told CTV News that 10 tickets have been handed out in relation to this event, and said investigations are still ongoing.

CTV News reached out to Tissen for comment but has not heard back.

Current health orders, which are set to expire on Jan. 8, 2021, limit outdoor gatherings to five people only. The province has said individuals who violate health orders can face fines of $1,296.

While provincial health officials have said there will be new health orders implemented after the current round expires, they did not provide details for what may and may not be included in them.

The Church of God Restoration, the church where Tissen is a minister, has also been fined multiple times for holding in-person and drive-in church services during the Code Red restrictions that banned the gatherings.

The province has since allowed drive-in events, such as drive-in church services, to continue as long as only members of the same household are in one vehicle and remain in the vehicle at all times.