Once a week during the summer, nearly 20 newcomer youth have been gathering to learn about nutrition.

At the last class, filled with teens from countries that include Sudan and the Philippines, the students chose to learn how to make sushi from scratch as a treat.

“It's actually good,” said 15-year-old Mohamed Serage.  “I didn't know how to make it at all. This is the first time."

Serage originally came to Canada from Sudan. He said the first thing he ate when he came to Winnipeg was cereal, and he and his family didn’t know much about what Canadians eat.

“We usually eat the same thing every time, and for Canadians it's way different. They have different stores, different kinds of foods," he said.

This summer-long nutrition program is offered through Food Matters Manitoba.

Facilitator Afroza Ferdouse, who is an international student herself, said many newcomers don't have enough knowledge about what to buy or where to get healthy food.

"They think Canadian foods are like pizza, chicken, fries, burgers and other processed and other restaurant bought foods," she said. 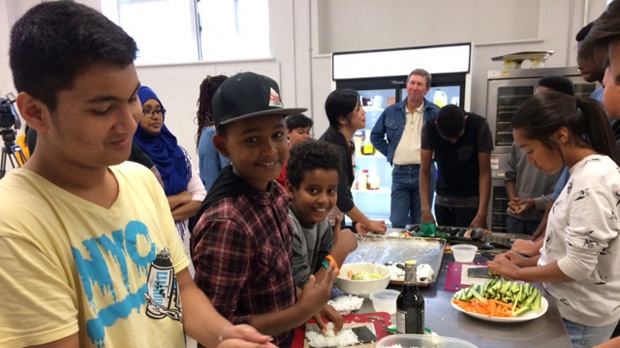 The program has been running with adult newcomers since 2015. This summer the program was piloted with youth.

Ferdouse said it could help bridge a gap, as many of the teens’ parents don't have the same capacity to understand English.

"If we teach them properly about healthy eating habits, proper nutrition, food safety, they can help their family at home."

The class even took a field trip to a grocery store to learn how to read labels and budget.

Raymond Ngarboui is the community development coordinator with Community Education Development Association or CEDA. He worked with Food Matters to bring the program to this group of youth, aged 13-15, at Hugh John MacDonald School.

The youth are a part of a larger program running this summer where they maintain gardens at the school.

"It's very important for them to learn how to eat healthy and to remain healthy. That's also a big savings for government in terms of health," he said.

One healthy change Serage has already made to his diet is cutting out sugary pop.

"…because it's not good,” he said. “When I was reading the ingredients, it's just not healthy."