Survey: half of respondents plan to have children aged 5-11 vaccinated against COVID-19 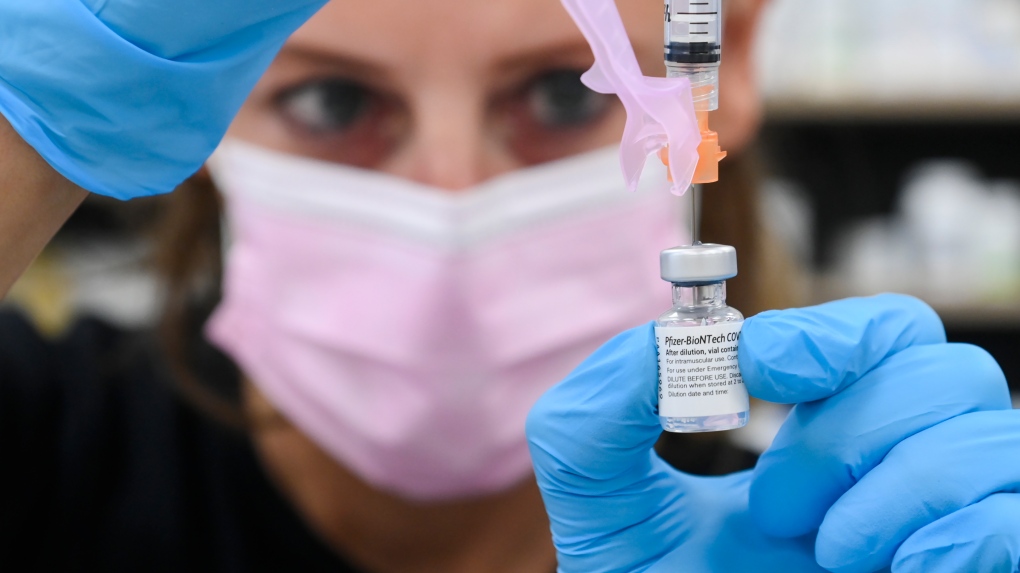 Barbara Violo, pharmacist and owner of The Junction Chemist Pharmacy, draws up a dose of the Pfizer-BioNTech COVID-19 vaccine, in Toronto, Friday, June 18, 2021. THE CANADIAN PRESS/Nathan Denette
Winnipeg -

Survey results by pollster Angus Reid suggest half of Canadian parents plan to have their elementary school-aged children vaccinated against COVID-19 right away.

Results released Monday show one in two of the 812 parents who responded will have their children vaccinated as soon as Health Canada approves one for the 5 to 11 age group.

Survey data indicated parents in Alberta were least likely to vaccinate their children in the specified age group, with 46 per cent affirming their intention to vaccinate as soon as possible.

Meanwhile, Ontario showed the strongest favourable response with 54 per cent and the Manitoba-Saskatchewan region close behind at 53 per cent.

Among those respondents who decided against ever obtaining any vaccine for their children, Quebec and Alberta were highest at 30 per cent and 29 per cent respectively.

Nationally, 18 per cent of parents said they planned to take a wait-and-see approach to having their children vaccinated. Nine per cent of the total survey respondents fell into the ‘Not Sure’ category.

In a release accompanying the results, Angus Reid noted that COVID-19 cases have been rising in younger children in many parts of the country.

Though children are at relatively low risk of serious illness from the virus, concerns about spread to vulnerable populations have health officials voicing support for vaccination among youngsters.

In September, Dr. Joss Reimer, medical lead of Manitoba’s Vaccine Implementation Task Force said the province is planning to be ready as soon as a COVID-19 vaccine is approved for younger children.

Reimer said the task force is looking at different options to provide that dose upon approval, which could include school-based immunizations.

“Regardless of whether or not we offer it in schools, we will still have medical clinics, our pharmacies, and, in more remote settings, our public health teams would be offering the vaccine to younger children once it’s approved,” Reimer said.

Angus Reid conducted a survey online from September 29 to Oct. 3 among a representative random sample of 5,011 adults. The company said a probability sample of this size would carry a margin of error of +/- 2.0 percentage points, 19 times out of 20.

The Bank of Canada is keeping its key interest rate target on hold at 0.25 per cent, but warning it won't stay there for much longer. The trendsetting rate has been at its rock-bottom level since March 2020 during the first wave of the COVID-19 pandemic as the economy went into a downturn and three million jobs were lost.

Russia warned Wednesday it would quickly take 'retaliatory measures' if the U.S. and its allies reject its security demands over NATO and Ukraine, raising pressure on the West amid concerns that Moscow is planning to invade its neighbour.

What to know about the Omicron subvariant BA.2

Scientists and health officials around the world are keeping their eyes on a descendant of the Omicron variant that has been found in at least 40 countries, including the United States.

A third of students think Holocaust exaggerated or fabricated: study

A third of North American students think the Holocaust was exaggerated or fabricated, according to a new study.

Russians' plan for live-fire naval drills off Ireland: Can they really do that?

With the announcement that Russia plans to hold a live-fire naval exercise next month off the coast of Ireland, aspects of military maritime law have come under scrutiny. CTVNews.ca has an expert explain everything you need to know.

As the global pandemic enters its third year, initiatives like Bell Let's Talk Day aims to help people of all backgrounds and age groups struggling with the mental health, especially amid the impact of COVID-19.

Ontario is reporting 92 more deaths related to COVID-19 as well as a slight decrease in the number of patients being treated with the disease in intensive care.

Wanted in the U.K.: Volunteers to catch COVID-19 in the name of science

The world's first medical trial authorized to deliberately expose participants to the coronavirus is seeking more volunteers as it steps up efforts to help develop better vaccines.