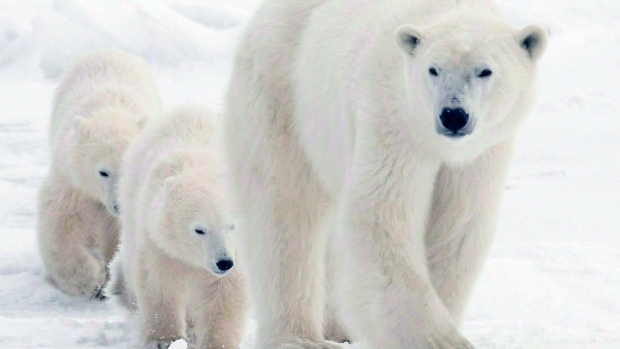 An exhaustive survey of the world's most southerly polar bears has found a significant drop in their numbers that scientists fear could be climate change finally taking its toll on a population whose health has long been in decline.

"If this trend is real and if it continues, I think we happened to have caught it just as it started to go over a cliff," said Martyn Obbard, lead author of the paper that appeared this week in the journal Arctic Science.

Obbard looked at the southern Hudson Bay population, a group of polar bears that live on the southeastern shores of Hudson Bay and into James Bay. His co-authors include scientists from the governments of Ontario, Quebec and Nunavut, as well as the United States.

The study found that the number of those bears has declined about 17 per cent in the past five years, from 943 to 780.

Disturbingly, the number of yearlings also fell. Aerial surveyors said 12 per cent of the population were yearlings in 2011; that number has fallen to five per cent.

"Many adult females may still be producing litters, but they may be less successful in raising cubs," says the paper.

A series of studies over the past few years has previously documented concerns about these bears.

They were getting smaller and skinnier as sea ice in the bays shrank, researchers found. By 2012, the local bears were already spending on average 30 days longer on land than they did in 1980, depriving them of their critical, fat-rich diet of seals.

But the overall population of southern Hudson Bay bears was still considered stable. Obbard did the last survey of their numbers in 2011 and his count was in line with 25 years of previous work.

It was time for another survey to try and resolve the contradiction, he said.

"That was the background for us."

He and his colleagues designed an aerial survey that was as extensive and rigorous as possible, set up to be comparable to the 2011 count. Although the 2011 and 2016 estimates were within each other's margin of error, further statistical analysis suggested an actual drop in abundance.

Obbard, who has since retired from the Ontario government, cautions that two data points aren't conclusive. They are, however, worrying.

The seeming stability of this population has provided fodder for those who suggest polar bears are adapting well to climate change and that fears for their future are overstated. Obbard said his survey vindicates the warnings of other researchers who have said that deteriorating bear health would eventually reduce bear numbers.

Obbard points out western Hudson Bay bears -- the ones living around Churchill, Man. -- are showing similar deterioration in body condition. We could be seeing the start of the long-predicted, climate-change induced shrinking of polar bear habitat, he said.

Meanwhile, Obbard said the survey numbers suggest a conservative approach to hunting quotas for the bears. Another conclusive survey should be scheduled for 2021, he said.