Tensions boil over during Wet'suwet'en protest at Portage and Main

WINNIPEG -- It was a mainly peaceful protest at Portage and Main Wednesday afternoon as a show of support for pipeline opponents in the Wet'suwet'en First Nation, but at one point tensions boiled over.

Police removed a man who had tried intervening in the protests. The man was seen entering one of the circles, before being physically ousted by protesters. The man was eventually taken away by police. Some of the protestors told CTV News they were a little shaken up by the incident.

"There was just one individual who I guess was angry at the protest. I think it was a lack of understanding," one protestor said.

This protest came as a result of RCMP arrests of anti-pipeline protestors in British Columbia, who are defying a court injunction by blocking construction of a Coastal GasLink pipeline. The natural gas pipeline has been approved by both the federal and provincial governments, as well as 20 band councils along the route, but hereditary chiefs in Wet’suwet’en say they have authority over the land to oppose the project. 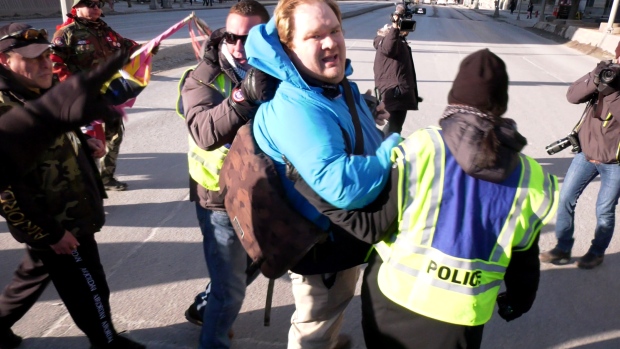 A man is led away by Winnipeg police after trying to intervene during a protest at Portage and Main on Feb. 26, 2020. (Source: CTV News Winnipeg)

There have been a number of demonstrations in support of the cause across the country, including several rail blockades, which have grown in size since OPP officers arrested 10 people on Monday at a blockade in Tyendinaga, Ont.

This was this second rally to take place at Portage and Main in the last few weeks as a sign of solidarity with the First Nation in northern British Columbia, though there have been others in the city including a staged “die-in” on a downtown street.

Wednesday’s protest is being held from 3 to 5 p.m.

Update: Traffic is now stopped at Main and Graham. Please avoid the area if possible. Expect delays throughout downtown. https://t.co/mB6QYh3E83

WPS is on scene & monitoring a demonstration at Poratge and Main. Avoid the area. Expect delays. Please use caution

We anticipate delays heading into the afternoon rush hour as a result of the planned protest downtown. Please allow extra travel time and check your schedule: https://t.co/nlonqIax10