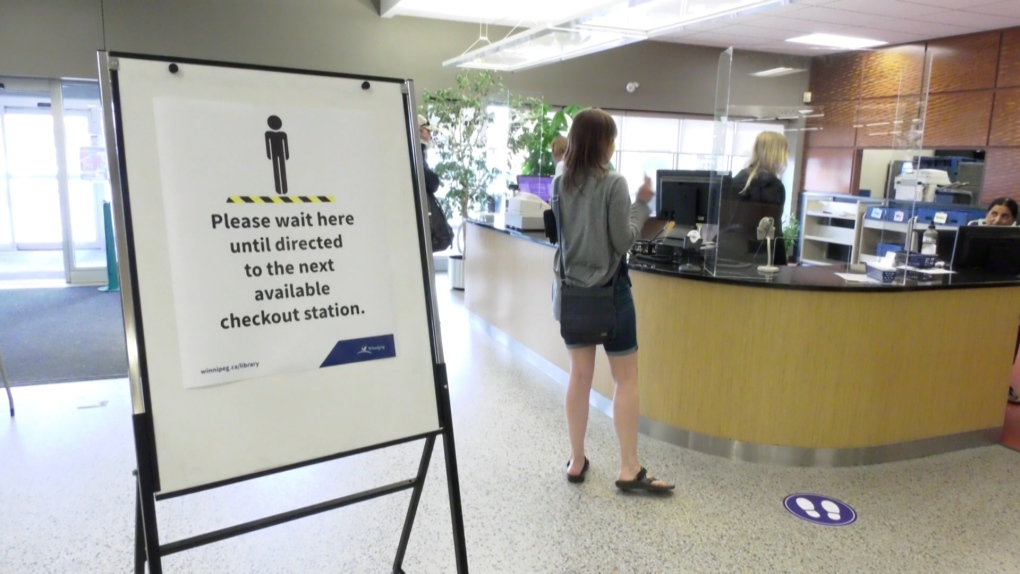 Holds are picked up at the Henderson Library on Monday, June 8, 2020.

WINNIPEG -- Several city services and programs are being suspended and city buildings will be closed to the public starting on Saturday due to new Code Red restrictions in Winnipeg announced on Friday.

Effective Saturday, Oct. 31, the City of Winnipeg is suspending all of its recreation and leisure programs and services, including Leisure Guide programming. The closures will be in place until further notice.

Jay Shaw, the manager for the city’s emergency operations centre, said they made the decision to close the gyms even though the closure is not required under the current Code Red levels.

“A lot of our facilities are tied together, so to make sure of public safety, and the protection of our employees and our residents, the decision was made to loop all of these closures in together, rather than try and piecemeal different subsections, based on where we had different recreational programming,” he said, adding no layoffs will take place at this time.

The city council building will be closed to members of the public, and City Hall wedding services have been suspended until further notice.

No restrictions or changes were announced for Winnipeg Transit.

The Winnipeg Metropolitan Region is under Code Red for at least two weeks.

Mayor Brian Bowman said he is encouraging people to show support for local businesses and restaurants that will be limited to take out or delivery during the restrictions.

“Get take out, get it as often as you can afford, and support some world-class local restaurants in our community that are hurting right now,” he said,

MAYOR CAUTIONS AGAINST TRICK OR TREATING

With Halloween coming up on Saturday, Bowman said he is encouraging people to not go out trick or treating on Saturday.

“I would like to encourage people in our city to consider doing something a little different this year,” he said. “Consider staying home with your children, like our family is going to be doing.”

Dr. Brent Roussin said earlier this week that children should not be going out trick or treating if they’re feeling ill, and people should avoid going out on Halloween unless they can safely limit the number of close contacts they have.

Halloween parties are not allowed this year, due to gathering size restrictions.

“The safest way to ensure we don’t see rising cases because of Halloween is to simply stay home,” Bowman said.