'The clock is ticking': Community calls for historic Rubin Block to get a new lease on life 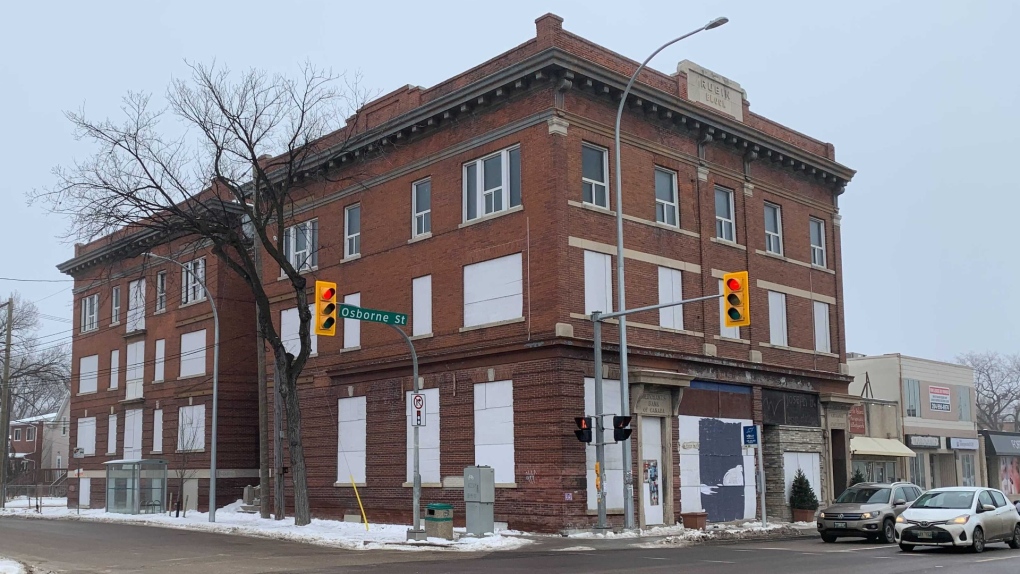 WINNIPEG -- A Winnipeg building built more than 100-years-ago has sat vacant for more than half a decade. Advocates are calling on the owners to give the shuttered building a second lease on life, and want the city to step in and make it happen.

The Rubin Block sits at the corner of Morley Avenue and Osborne Street. While it is now empty and boarded up – many in the community see its potential as a way to revitalize the community and use its 21 apartments and retail space to provide affordable housing in the city.

"It's a very important block on the corner of Morley and Osborne to the community, to South Osborne," said Cindy Tugwell, the executive director of Heritage Winnipeg, one of the groups that have been advocating for the building for nearly five years.

"There's also a great need for affordable housing in that area."

While Tugwell said the Rubin Block holds the potential for affordable housing in South Osborne, it also holds historical significance in the city. 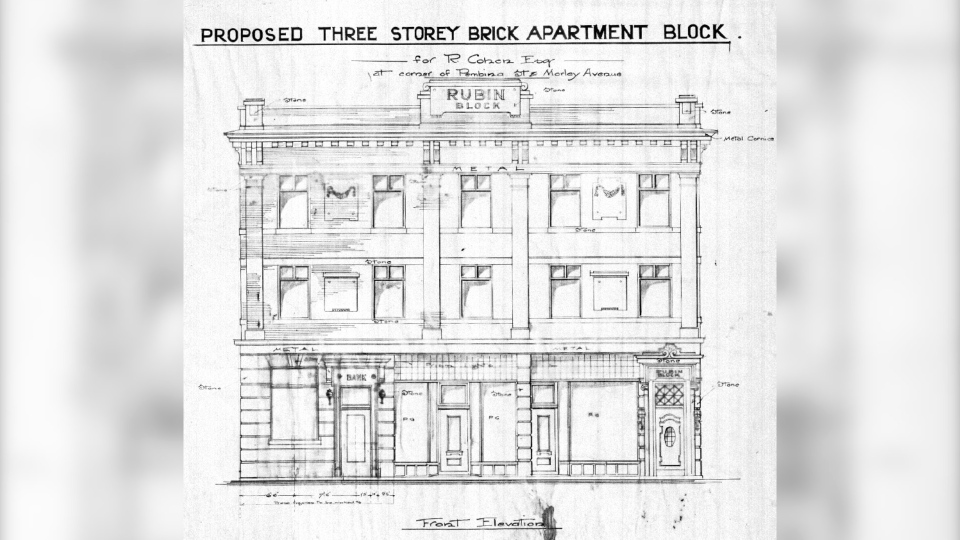 It was built in 1914 and designed by Winnipeg architect Max Zev Blankstein, who designed a number of buildings in the city in the early 1900s, including the Uptown Theatre.

Heritage Winnipeg said repairs were never completed after the 2014 fire and the building was boarded up. It has sat vacant ever since, despite pleas from the community for the owners of the building to either restore it or sell it to someone else who will.

"I think our biggest fear is right now is it's unprotected," Tugwell said. "The clock is ticking for this building."

The building was also been placed on the National Trust for Canada's top 10 list of endangered buildings in 2019. 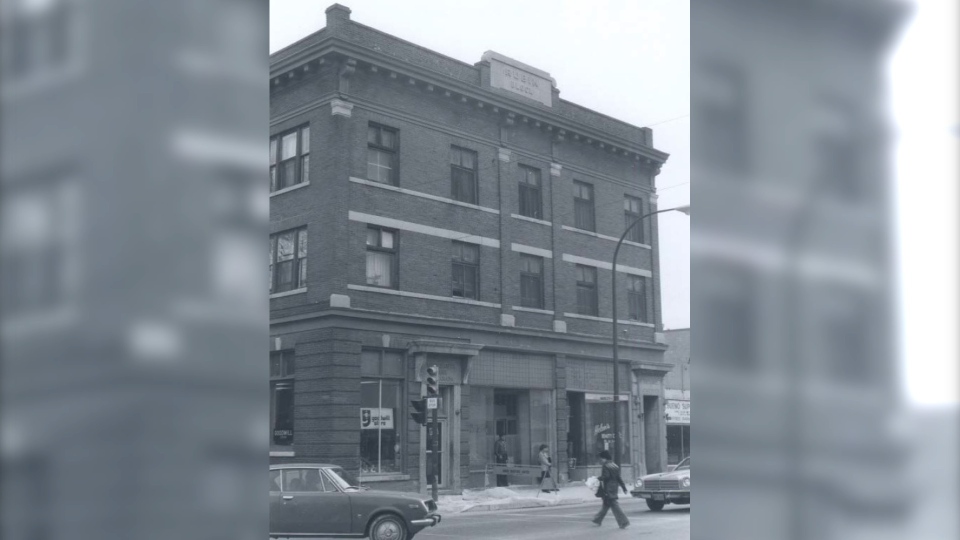 Since it was shuttered, a group called the Rubin Block Advocates have been working alongside Heritage Winnipeg to save the building.

"Up until very recently, it was an active part of the community that provided reasonably priced housing, as well as some commercial spaces on the main floor," said Jeff Palmer, a member of the Rubin Block Advocates and resident of South Osborne for more than 10 years.

"And we would like to see it become that part of the community again."

It's a call that was echoed by an anonymous South Osborne resident who plastered a massive letter to the side of the building, calling on the owners to address the concerns raised in the community. 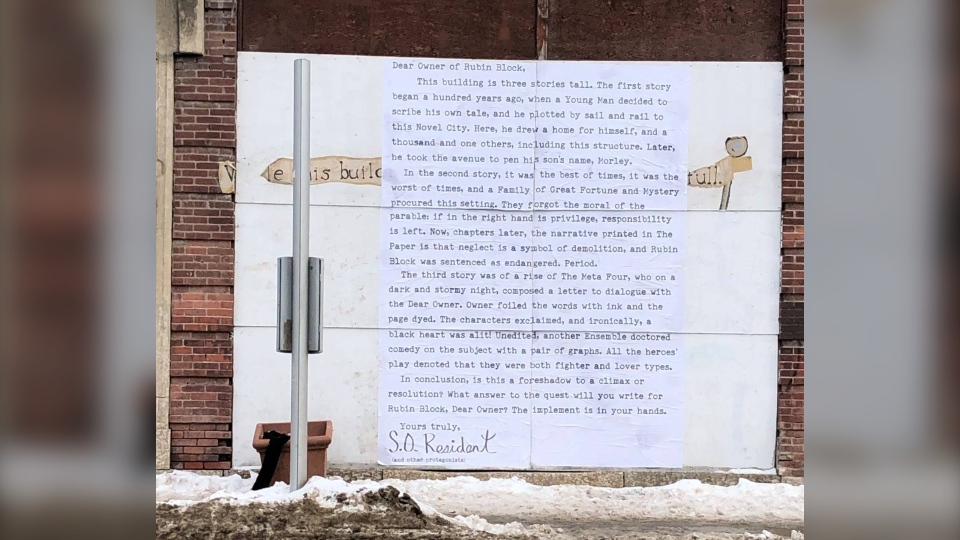 The letter was painted over hours after it was posted.

Tugwell said while she was previously been in contact with the owners of the building, a company called Composite Holdings, they have been "stonewalling" her recently.

Composite Holdings confirmed with CTV News it owned the Rubin Block, but would not comment on the issues raised by community members, referring CTV News to the owners.

The owners of Composite Holdings have not responded to CTV's request for comment. 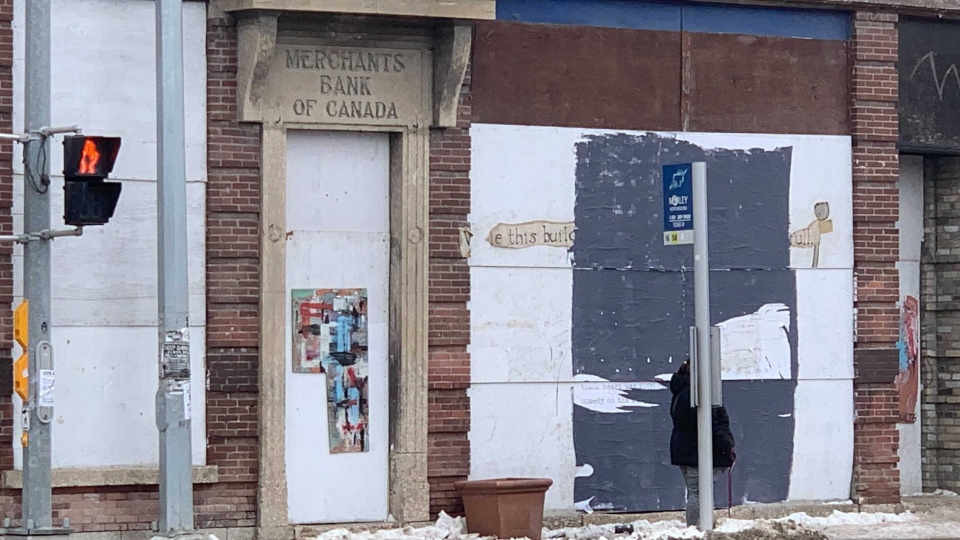 Tugwell said she would like to see the City of Winnipeg step in, and said currently the city's bylaws aren't as effective as they need to be.

"The reality is, is that it is lawfully owned, and (the owners) are paying their taxes, and they are complying with the City of Winnipeg bylaws," the area's city councillor Sherri Rollins said.

"It is frustrating as a city councillor who wants to see the highest and best use of the ward, and have a property sit idle, underutilized, and in this case boarded up."

"Of course they would benefit from that building being filled by people in it."

Rollins said there are changes to the city's bylaw to deter owners from letting their buildings sit vacant – such as the empty building fee, which was put into effect in 2021 and charges owners one per cent annually of the most recent assessed value of the vacant building.

She said the Rubin Block's estimated assessed value is $1.4 million.

She said Winnipeg's bylaws may fall short when property owners pay taxes and pay the vacant building fee, but continue to sit on empty buildings.

"That has been the frustration of the community, and I share that frustration," she said. "We don't like to see vacant buildings that were once thriving and being used." 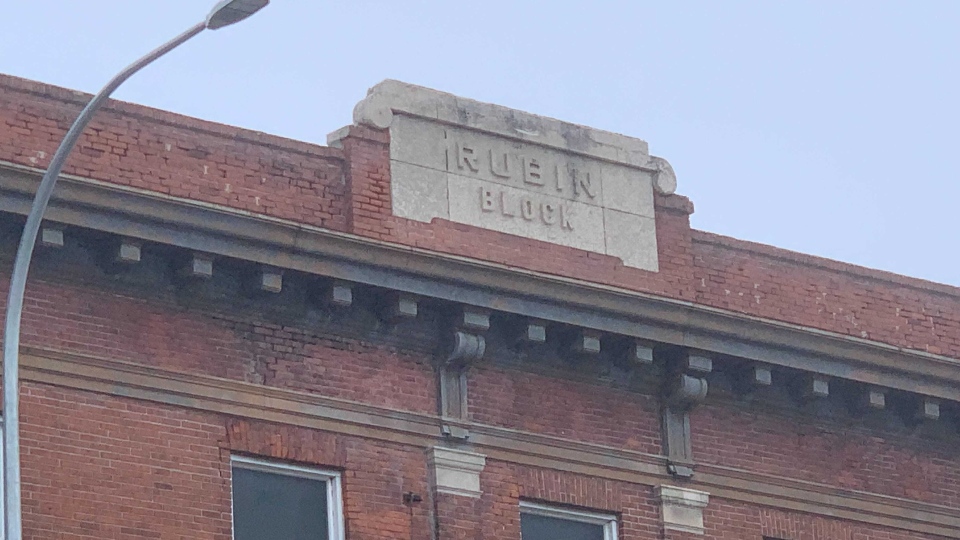 Both Heritage Winnipeg and the Rubin Block Advocates had called for the building to be included in the Rapid Housing Initiative – a program created by the federal government giving the city $12.5 million to go towards affordable housing projects.

Tugwell said, while the application for the Rapid Housing Initiative has passed, they are still hopeful for the future of the Rubin Block.

"I think that this is a testament to the changes that need to take place so that we don't have these kinds of vacant (buildings), an urban blight on our streets," she said.

"We want to save this building and you can't save a building unless you occupy it."