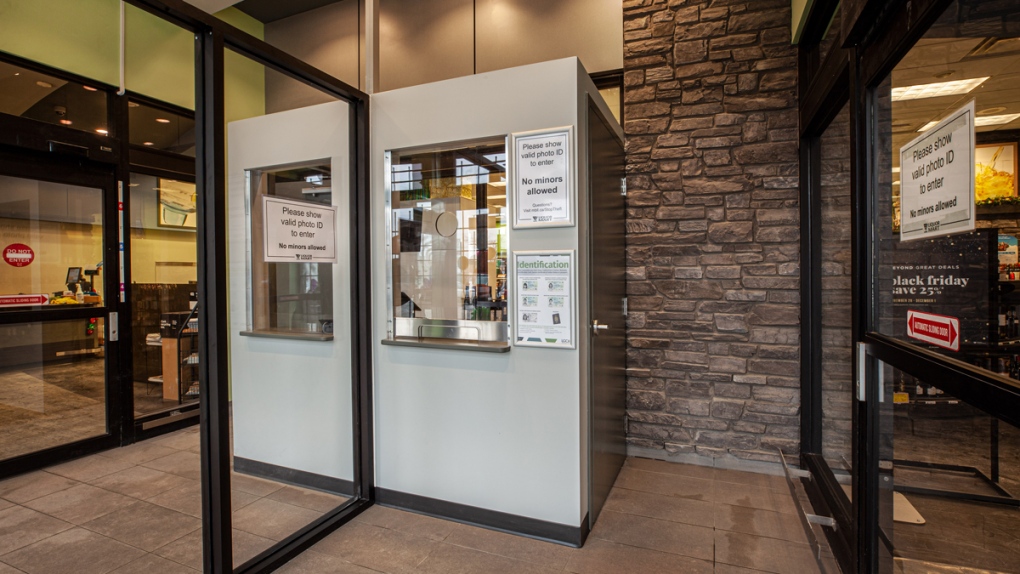 Supplied image of the controlled entrance at the Tyndall Market Liquor Mart.

WINNIPEG -- After a rash of brazen and violent liquor store thefts in the province, Manitoba Liquor and Lotteries (MBLL) introduced controlled entrances – an initiative that it says stopped nearly all of the significant thefts and kept more than $2.1 million worth of alcohol from being stolen.

On Monday, MBLL confirmed with CTV News that all 36 Liquor Mart locations in Winnipeg, as well as the Liquor Marts in Brandon, Portage la Prairie, and Selkirk, have had permanent controlled entrances installed.

The entrances require visitors to show valid photo identification to a security guard who is protected behind a barrier. IDs are scanned before the person is allowed into the store.

The Crown Corporation told CTV News that since the controlled entrances were installed, the drop in thefts has been dramatic.

"The thefts occurring in Liquor Marts with controlled entrances are no longer of a brazen nature where individuals were stealing large quantities of product and often threatening violence," a spokesperson for MBLL told CTV News in a statement.

"For the minor number of thefts that do occur, Manitoba Liquor & Lotteries has been able to provide law enforcement with identification information."

The controlled entrance also saved MBLL millions of dollars worth of liquor. From April 1, 2019, to December 31, 2019, it reported $2,315,000 in shrinkage – which refers to the inventory or product lost due to shoplifting, employee theft, or administrative errors.

“All of us at Manitoba Liquor & Lotteries are pleased with the results the controlled entrances have had in significantly reducing the incidents of thefts – and especially robberies – at our Liquor Marts,” Manny Atwal, president and CEO of MBLL, said in a news release.

“To be able to return our stores to a place where our customers and employees are able to shop and work without the looming threat of violence has been a great relief.”

MBLL said the total project, which includes the installation of 43 controlled entrances, was budgeted to cost just over $2.5 million. Though the final cost of the project is not available until later this month or early February, MBLL said it is on track to be under budget.