The women behind the first Michif-French dictionary 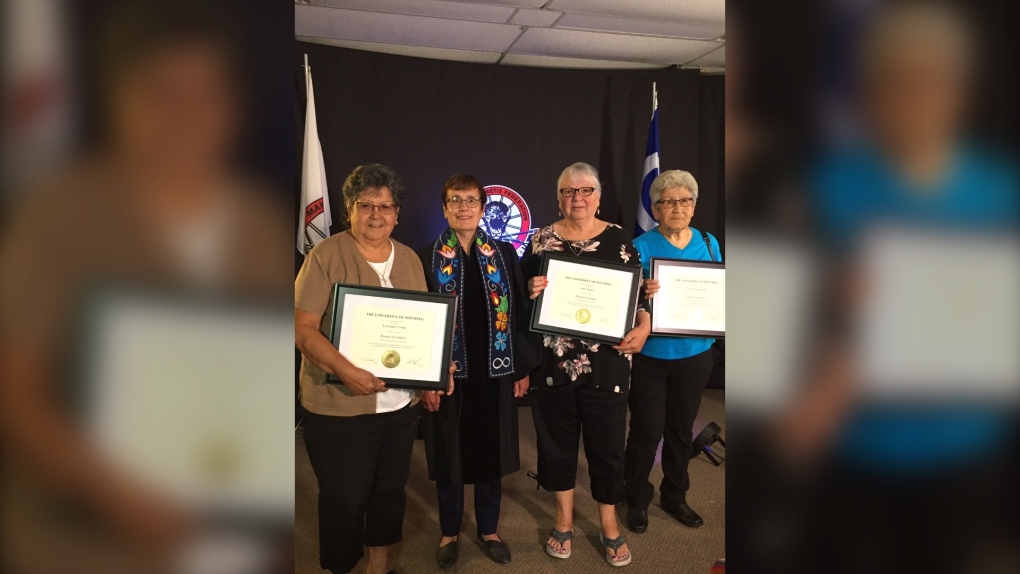 WINNIPEG -- The University of Winnipeg has given a trio of Métis grandmothers, known as the ‘Dictionary Ladies’ of St. Laurent, an honorary doctor of letters.

Lorraine Coutu-Lavallee, June Bruce and Agathe Chartrand were honoured at a special convocation during a graduation acknowledgment ceremony, hosted virtually by the Manitoba Metis Federation.

The three women are Métis grandmothers and Knowledge Keepers, who protected and preserved their ancestral language by creating the first Michif-French dictionary, as it is spoken in St. Laurent.

“We were really happy, it was a great honour,” said Coutu-Lavallee on Friday.

The project, according to Coutu-Lavallee, began in 2011, after Patricia Miller-Chartrand, another “Dictionary Lady” who has since passed away, called her.

“She wanted to write the language, because it had never been written before,” she said. “It was getting forgotten over there. The younger generation all spoke English, so we just wanted to keep it going.”

Coutu-Lavallee said Michif-French was the first language she learned as a child, and said preserving the language was important.

The dictionary, which includes recipes, prayers, and an alphabetic and thematic organization of words, was self-published in 2016 through McNally Robinson Booksellers.

“June, Agathe, and Lorraine have voluntarily taken on the role of community educators,” said Annette Trimbee, president and vice-chancellor of the U of W, in a news release.

The women are also helping the younger generation stay informed about their language and culture.

The Dictionary Ladies put together a curriculum for Michif language and culture to be taught in schools in St. Laurent. They also teach the language to younger kids through activities and games.

“We wanted to preserve it for our kids and our grandchildren, and our great-grandkids, and all the generations that didn’t know how to speak it,” said Coutu-Lavallee.

Doris Mikolayenko-Leclerc was also part of the Dictionary Ladies, but has passed away.

St. Laurent, which is a Métis community on the eastern shore of Lake Manitoba, is matrilineal, which means mothers and grandmothers take a leadership role in passing down the customs.