'They call me the bag lady': 89-year-old Winnipeg woman turns shopping bags into sleeping mats for the homeless 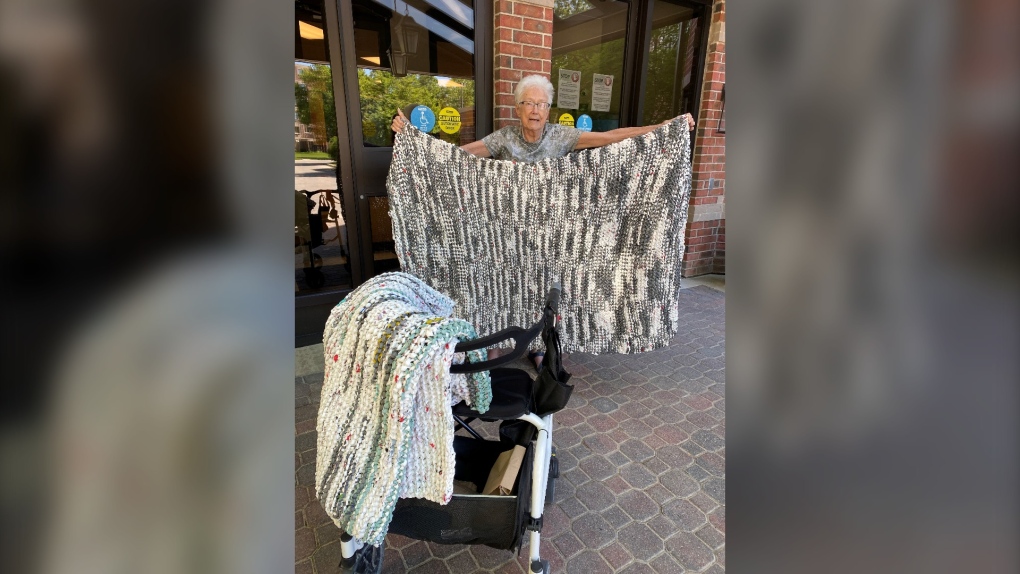 WINNIPEG -- A recycling project turned into a COVID pastime for 89-year-old Ruth McKinlay of Winnipeg, who has taken thousands of plastic bags and turned them into comfortable sleeping mats for vulnerable Winnipeggers.

“They call me the bag lady,” said McKinlay, referring to her friends at the assisted living facility where she resides.

It all began a couple of years ago as a suggested activity from her daughter. The idea stuck, and with the help of about a dozen lady friends, the mat making began. They were knitted and donated to Agape Table, a non-profit that provides meals and services to people in need.

“We would meet once a week and work on mats, but it’s very hard on your hands and one-by-one, they dropped off,” McKinlay said. “Not the mats, the ladies.”

McKinlay’s project turned solo and has continued throughout the pandemic, with mats slowly filling up her home until a new delivery can be made.

When describing the process, it seems simple yet complex. Turn the bags into tubes and stitch them together, repeat many times.

A three by six foot mat takes between 500 and 650 bags, which are collected and donated by friends.

“If you were just doing it when you had time and you were doing something else, ‘cause you weren’t house-bound with COVID, it would probably take you about a month-and-a-half to do a mat. I do a mat in about a week-and-a-half.”

“Every time I finish a mat I lay it out on the floor and I lie down on it. They are quite comfortable and are dandy for if you are sleeping out under the stars,” said McKinlay.

The mats are personally donated to Agape Table, with deliveries currently on hold due to COVD-19 precautions. Pre-pandemic, and with the help of her ladies, just over a couple of dozen mats were given. Another dozen now resides in the home where they’re made until it is safe for McKinley to get out and about.

“We take them to the Agape Table, our reason being it’s the only one I could think of that was (serving) every faith. I didn’t want to favour one church over another. I thought maybe it would limit the people who wanted to help me,” said McKinlay.

Agape Table then hands out the mats to people in need. McKinlay said in the few journeys she’s made to the downtown area she has seen several people carrying them.

When asked about her mat making future, McKinley said it has become part of her daily routine. She said she’s even taken mats with her to work on when visiting friends.

“I don’t know what I’ll do if I ever stop doing these. It really is time consuming, (and) to me very interesting,” said McKinlay.

“You have to make your own fun in times like this, but for me it’s been quite bearable because I have this activity to do.”