This homeowner is fuming after snow clearing crews damage driveway

WINNIPEG -- With all the recent snow that has fallen in the city, crews have been kept busy clearing the streets, but one man who lives in East Kildonan is furious over something that shouldn't have been cleared.

Bob Danell, who has a rubber driveway, set up two five foot poles with red tape across them to keep plows off his driveway. Thursday morning, Danell said he found the poles under a pile of snow.

"He shattered it right out of the ground. I had it a foot and a half in the ground," Danell told CTV News.

"You look at the way they were doing the street and the way it was cleared here, and they literally directed their plows at the post." 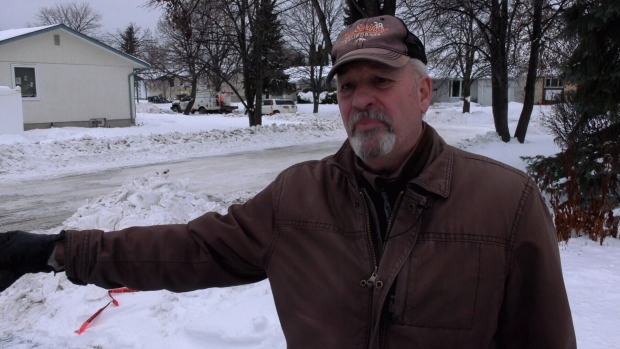 Bob Danell (pictured) who has a rubber driveway, set up two five foot poles with red tape across them to keep plows off his driveway. (Source: Jordan Haslbeck/ CTV News Winnipeg)

Danell isn't the only one in the neighbourhood with damaged property. Deidre Demueule said her lawn has been torn up before.

"Every year it costs me money because my lawn is always a wreck come spring," said Demueule. "I've claimed for it and they'll say, 'No that's not in the budget. That's seeding and we don't seed anymore.'"

She added that she doesn't bother complaining anymore because nothing happens when she does.

The city provided a statement to CTV News saying contractors are required to take responsibility for any damage they cause to the public.

"If it is determined that a contractor had control over the accident location at the time loss or damage occurred, the city's adjuster will forward the claim to the contractor for their investigation and handling. Residents will be advised in writing when their claims have been forwarded to a contractor," said the statement.

Danell said he has filed a complaint with the city, but added it's less about the cost of the damage and more about the principle.

"He should be disciplined. He shouldn't be behind the wheel of a big dangerous machine if he's going to disregard obvious things that he could have avoided and should have avoided," said Danell.