WINNIPEG -- Selkirk, Man., resident Majid Kermani has created a sculpture to send a message in the wake of the crash of Flight 752, which was brought down by an Iranian missile amid tensions between the country and the United States.

“I lost a friend with his family in that airplane crash,” Kermani told CTV News Winnipeg.

He said the sculpture of the plane includes doves to represent “the souls of the innocent people” who died in the crash.

“After this happened, I thought that I have a responsibility to do something more than complaining,” he said.

Kermani said he believes the crash can serve as a lesson for all people.

“We want peace,” he said. “We want a normal life, with no bloodshed.”

-With files from CTV's Jamie Dowsett 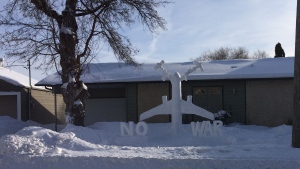