This year's winning designs for warming huts at The Forks 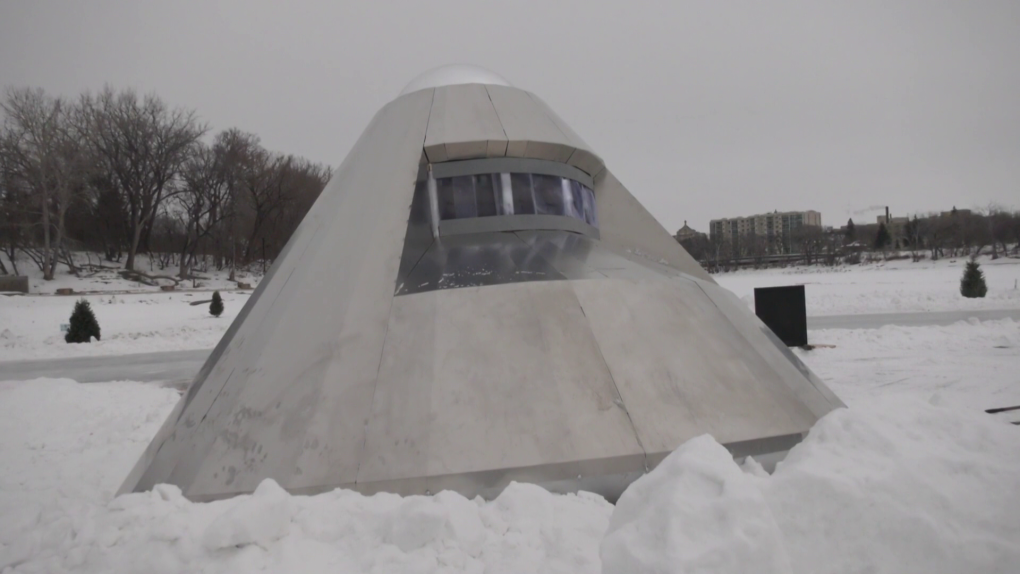 'Hot Landing' by AtLRG Architecture Inc. is on display at The Forks on January 29, 2021 (CTV News Photo Ken Gabel)

WINNIPEG -- The new crop of warming huts are officially on display at The Forks.

As part of this year’s annual Warming Huts Competition, more than 150 international artists and architectural groups submitted entries to have their warming huts designs displayed on the river trail.

Three huts were selected by a jury based on their creativity in the use of materials, ability to provide shelter, the poetics of the assembly and form, integration with the landscape, and ease of construction.

This year’s winning designs include ‘Hot Landing’ by AtLRG Architecture Inc. in Winnipeg; ‘Divergence’ by Thomas Cheney Architects from Seattle; and ‘Yöhäus; by Karina Leong and Jeremy Chan, a team from Hong Kong and Kuala Lumpur.

Paul Jordan, CEO of the Forks North Portage Partnership, said the international winners are excited to see their designs on television, since they couldn’t come to Winnipeg to see them in person.

“They’re totally energized and they’re going to be watching,” he said.

“They’re going to want to see what their huts look like. We’re hoping to get them out next year so they can physically, actually see it, but we’ll just see what next year brings.

According to The Forks’ Instagram, in order to honour the idea of keeping things local, the originators of the Warming Huts Competition were also invited to create designs. Their designs include ‘Assembly’ by 701 Architecture and Price Industries; The ‘Benesii’ by Scatliff + Miller + Murray, Treaty One Development Corp., and PCL Construction; and Sunspot by 5468796 Architecture.

The warming huts are now on display at The Forks, but due to current public health guidelines, entry is not permitted.

-With files from CTV’s Ken Gabel.