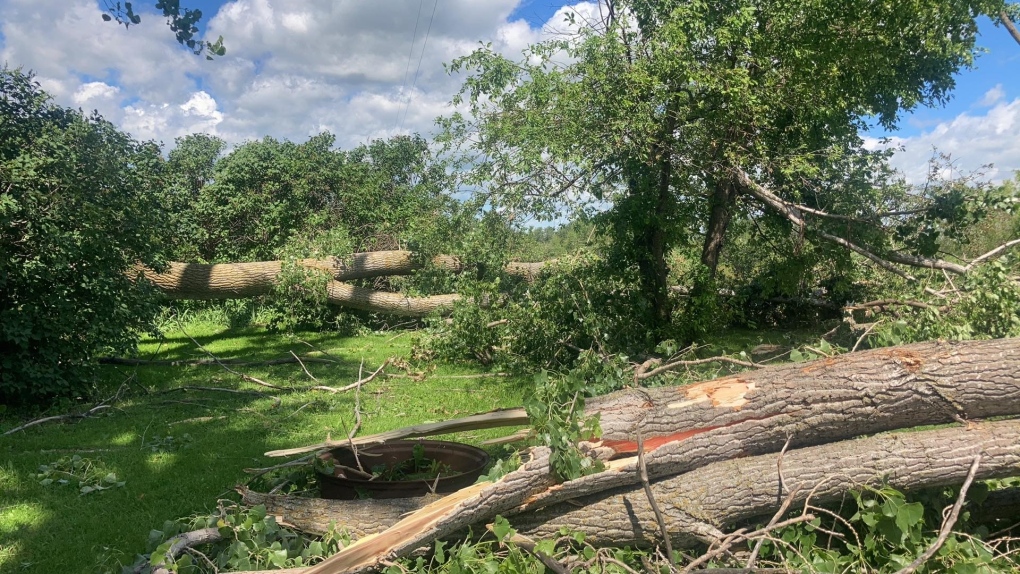 The damage at the home between Gardenton and Tolstoi. (Source: Erica Jean Preston)

WINNIPEG -- Southern Manitoba was hit with a thunderstorm on Monday night, causing flooding, power outages and destruction in the province.

Rosemarie Fedoruk, who lives between the Manitoba communities of Gardenton and Tolstoi, said the storm caused some minor damage to her patio and gazebo.

“My grandson’s play structure in the yard got half-demolished because there’s a big tree on it right now,” she said.

“And we have trees all around us knocked down.”

Fedoruk said many of the trees that fell in Monday’s storm had been around for several years.

She said it was scary to be home during the storm.

“Our yard was just shambles,” she said.

“All of these big trees that have been here for 30-plus years are down, twisted, some are partly up, but they look like they’ve been chipped. They look like toothpicks actually.”

Fedoruk said she has family helping to clean up the storm damage.

According to Environment Canada, the most significant weather events took place in the Red River Valley and slightly east of that area, though there were heavy rains in the Parkland area, especially by Dauphin.

The weather agency confirmed funnel cloud sightings in Letellier and Dauphin, but noted they haven’t confirmed if these funnel clouds touched down or caused any damage.

It did say a wind gust of 104 km/hr was recorded in Dauphin. Other parts of the province that saw heavy winds included Gretna and Altona.

Environment Canada said there have been reports of storm damage in Altona, Gardenton, Sommerfeld, and Tolstoi. There was also flooding in St. Pierre-Jolys, as well as heavy rainfall totals in Gretna, Morris, Winkler, Emerson, Steinbach, and Altona, among other parts of the province.

Due to the storm, there were power outages in the Manitoba communities of Altona, Letellier, and Steinbach.

The City of Winnipeg saw between nine to 11.5 millimetres of rain overnight.