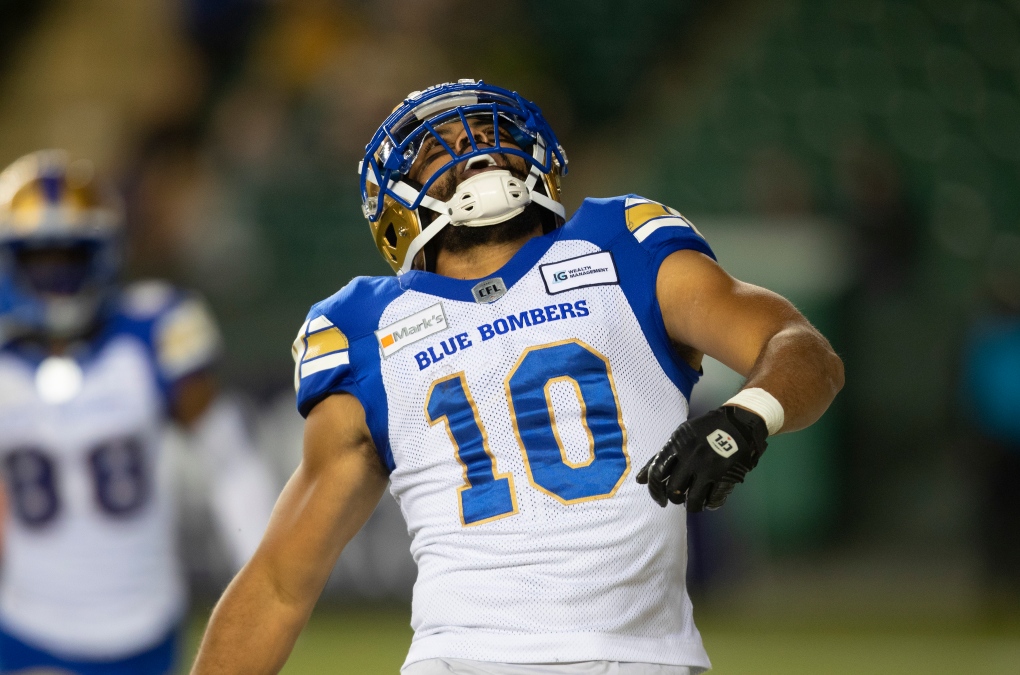 The defence turned the tide for the Winnipeg Blue Bombers on Saturday.

DeAundre Alford and Adam Bighill recorded defensive touchdowns as the league-leading Blue Bombers fought their way past the Edmonton Elks 37-22.

"Our defence, scoring two touchdowns for us, that is absolutely amazing when they are able to create turnovers like that and capitalize on them with points on the board," said Winnipeg running back Andrew Harris.

"Our defence has been our backbone. They really flexed when we needed them to."

Alford had two touchdowns in the contest.

Elks quarterback Taylor Cornelius went 19 for 33 and passed for 243 yards with three interceptions in his CFL debut as he replaced Trevor Harris, who was placed on the six-game injured list with a neck injury.

"I thought he played really poised," said Elks head coach Jaime Elizondo. "Listen, for having one day of practice, I thought he came out and showed some things that were really, really encouraging and I thought the guys responded really well to him.

"He didn't get flustered. I know he's going to be hard on himself with the mistakes he made. But those interceptions were a credit to the defence, they had some good breaks on the ball."

Bombers quarterback Zach Collaros went 19 of 24 passing for 252 yards, a TD and an interception.

Winnipeg got off to a blazing start by scoring on its first drive, going 80 yards in nine plays, capped off by a 12-yard touchdown pass from Collaros to Darvin Adams.

The Blue Bombers doubled their lead on their next drive as Nic Demski ploughed his way through several defenders for a 21-yard rushing major to make it 14-0.

Edmonton got back into the game midway through the second thanks to a Christian Rector fumble recovery on the Bombers' nine-yard-line, leading to a James Wilder Jr. touchdown run.

Winnipeg kicker Ali Mourtada missed a 28-yard field goal attempt before Edmonton's Sean Whyte nailed a three-pointer from 44 yards out to make it 15-10 at the mid-mark.

Edmonton surged into the lead early in the third quarter with an unconverted 19-yard TD run by Wilder.

However the Bombers regained the lead as Alford picked off Cornelius and took it back 22 yards for the touchdown. A two-point convert made it 23-16 for Winnipeg.

Whyte responded with a 32-yard field goal before Mourtada missed his third field goal attempt of the game from 44 yards.

The Bombers defence did it again late in the third as Cornelius fumbled deep in his own end, leading to a three-yard scoop and score by Bighill.

After Whyte kicked a 19-yard field goal, Winnipeg put the game away with a one-yard TD plunge by Sean McGuire.

Both teams have a bye next week. The Elks' next game will be in Ottawa on Sept. 28, while the Bombers will be in B.C. on Oct. 1. Winnipeg and Edmonton will then play each other again in a home-and-home series.

This report by The Canadian Press was first published Sept. 18, 2021.