Tornado touches down in Manitoba during storm causing flooding, destruction

WINNIPEG -- Southwest Manitoba was hit with a severe storm on Sunday night, leaving damage, flooding, and a tornado in its wake.

Environment and Climate Change Canada (ECCC) issued the following rainfall totals for the past 24 hours. The agency also said the rainfall in Brandon set a single-day record.

Some areas in the region saw much less rainfall – under 50 mm -- which ECCC said is not unusual for thunderstorms. 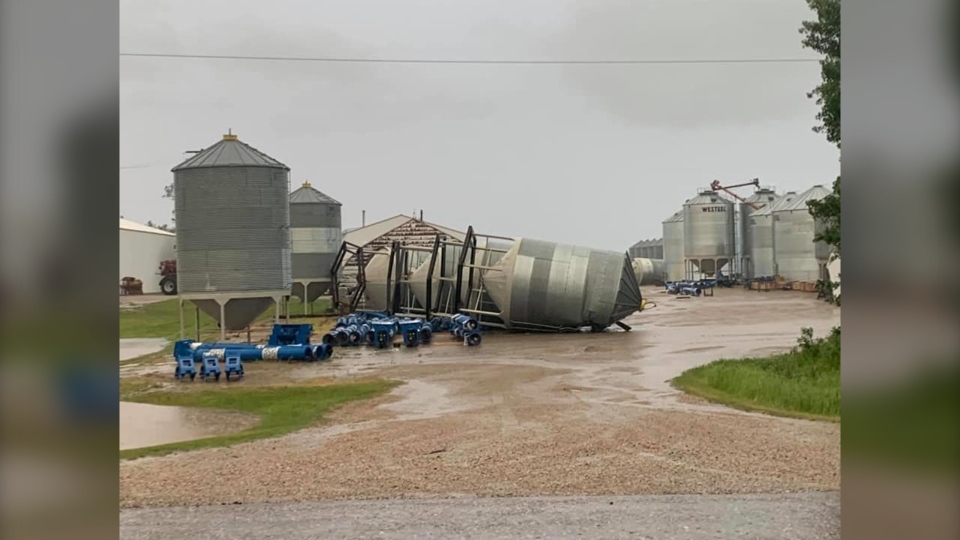 ECCC confirmed that a rain-wrapped tornado briefly touched down near Rapid City. It added there were snapped trees and property damage in the area. It is continuing to investigate.

The storm has also forced the following highway closures:

According to Manitoba Hydro, about 4,000 customers are without power because of the storm, but flooding delayed restoration.

The Crown corporation is currently working to fix a transmission line in order to power four substations.

Hydro expects power to be restored to most customers by midday on Monday, though customers in rural areas won’t have their power back until the evening.

It intends to have power back to everyone by the end of the day.

Several Manitobans have taken to social media to post about the impact of the storm:

The City of Brandon posted on Twitter Monday afternoon that public works staff are busy clearing catch basins, cleaning up storm debris, and using pumps to remove standing water. Residents are being asked to clear debris away from catch basins in their neighbourhood, and put the debris in green bins or garbage bins.

The city is also asking the public to avoid driving around the town to see the impact of the storm while crews are working.

“You will only be in the way & unnecessary vehicles have potential to create damaging wave action or become stalled in the road,” the tweet reads.

Residents of Brandon who need sandbags are able to access empty bags and sand at the Civic Services Complex (900 Richmond Avenue East).

- With files from CTV’s Tim Salzen and Stephanie Tsicos.