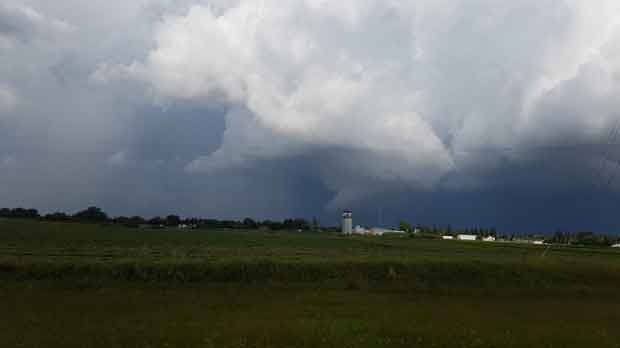 Earlier tornado warnings have been downgraded, with watches still in effect.

Just after 5 p.m., Environment Canada’s tornado watches turned into warnings for certain parts of Manitoba, with watches still in effect for other areas.

“A funnel cloud has been sighted just north of Hartney. The funnel may form into a tornado,” said the website.

Environment Canada meteorologists said that they are tracking a severe thunderstorm that is possibly producing a tornado.

They said there is possibility of damaging winds, large hail and intense rainfall.

Tornado warning in effect for:

Environment Canada is warning people of a dangerous and potentially life-threatening situation as it issued severe thunderstorm and tornado watches for southern parts of the province.

“Conditions are favourable for the development of severe thunderstorms which may produce tornadoes,” said the website.

At 10:41 a.m. Wednesday issued watches advising people to be prepared for severe weather.

“There is strong shear to the environment today with southeast winds at the surface and strong southwest winds aloft so rotation is likely with the storms that develop,” the website said. “The strongest shear is over southwest Manitoba so tornadoes are possible in that area especially when storms first develop.”

In the event of a tornado, Environment Canada advises people to go indoors to the lowest floor, away from outside walls and windows.

For updated watches and warnings as well as tips on what to do in the event of severe weather, head to Environment Canada’s website.

Environment Canada issued a tornado watch in effect for: