By Michelle McQuigge The Canadian Press
Published Wednesday, May 13, 2015 7:45AM CST 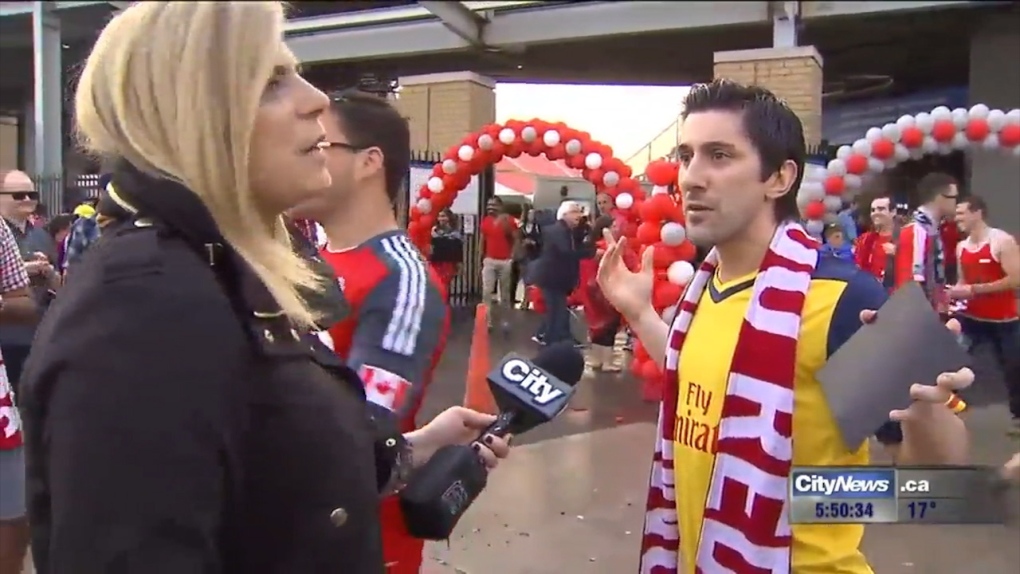 TORONTO -- A social media firestorm touched off by a female TV reporter who fought back against sexually explicit taunts hurled by several soccer fans has cost one Toronto engineer his job.

Ontario's largest electricity provider, Hydro One, issued a statement late Tuesday saying it has terminated one of its employees in connection with the incident Sunday at a Toronto FC game, which was captured on video.

CityNews reporter Shauna Hunt is shown in the video questioning two men who emulated a trend seen in other cities by shouting obscenities into her microphone.

A Hydro One spokesman said Shawn Simoes, an assistant network management engineer with the company, was fired for violating the company's code of conduct.

Hunt said her confrontation, which triggered a flood of social media support, came about after almost a year of nearly constant harassment.

"I hit my limit and I had to push back," Hunt said in a telephone interview. "I wasn't going to stand for it anymore. It was time to say something."

Her confrontation with two men, captured by CityNews cameras and aired later that day, shows the men dismissing Hunt as she asks what could prompt them to taunt women in such a way.

When asked how their mothers would appreciate such conduct, one man is heard saying that she would have found it funny eventually.

Several social media posts also named the second individual, saying he worked for Cognex Corporation. A company spokeswoman said the views expressed in the video were "reprehensible" and inconsistent with Cognex's values.

"We cannot comment on employee matters publicly, but we take this issue seriously and will be addressing it," Sarah Laskowski said in a statement.

The video has since gone viral and touched off a flood of support, but Hunt said she hopes it shines a light on an issue Canadian female reporters have been grappling with since at least last summer.

"It happens almost every day, sometimes numerous times a day," Hunt said. "It's not just me, it's reporters all over the city almost on a daily basis."

Many of Hunt's colleagues later shared their own experiences of being taunted on air, with one reporter telling CityNews she had once heard the same sexually explicit remark shouted by a nine-year-old boy.

The child's actions, according to one gender analyst, show that overt sexism can take a heavy toll on society as a whole.

Steph Guthrie said such comments make women feel objectified and powerless to shift the focus from their bodies back to their professional accomplishments.

She also said allowing verbal taunts to go unpunished can set the stage for younger generations to keep the cycle alive.

"When these videos are circulating and young men are seeing this as an example of how to 'perform' their masculinity, they're getting I would say a violent understanding of what masculinity is, and they're seeing it as a show of dominance over women in particular," she said.

Another observer said the incident once again highlighted the power of social media.

"Objectionable behaviour like this has long been an issue...," said social media expert Carmi Levy. "But social media has accelerated and amplified the process, exposing these cases to a far larger audience, and making it that much easier for bosses and significant others to connect the dots and bring those responsible to some form of online justice."

Backlash against Hunt's hecklers was swift and wide-ranging even before word of Simoes' termination.

Maple Leaf Sports and Entertainment, the parent company of the Toronto FC soccer team, said the perpetrators would be banned from future games if they are identified.

Tim Bezbatchenko said harsh penalties are necessary to send a message that "degrading" behaviour is not acceptable, adding he hopes to shift the dialog towards solutions rather than problems.

"We have a platform to address things that are still happening in society, and that's really what's important," he said. "I think we need to work together. The whole city of Toronto and all of our sports fans, to eradicate this type of behaviour on our properties."

"Thanks Γåòcitynews for saying #ItsNeverOkay. Whether or not it's caught on film, sexual harassment at work is no joke," the tweet read.

The phenomenon of shouting lewd remarks at female reporters is far from local. In 2014, reports began emerging in the United States of men approaching female reporters as they were doing live bulletins, trying to commandeer their microphones and yelling about committing sex acts.

Similar incidents in Canada have prompted police forces in both Toronto and Calgary to warn that hecklers could find themselves facing criminal charges.

A spokeswoman for Toronto police said Tuesday the force was consulting with the Crown but couldn't start investigating the incident without a complainant.

Hunt said her spontaneous decision to confront the latest group of hecklers was prompted by a wish to make them realize the impact of their words.

"I just want anyone who's ever done it or is thinking of doing it or thinks it's funny, just think of the consequences," she said. "It's degrading, it's disrespectful. You really put these reporters in a very uncomfortable position, and it's not just me -- we're all sick of it."

-- With files from Neil Davidson