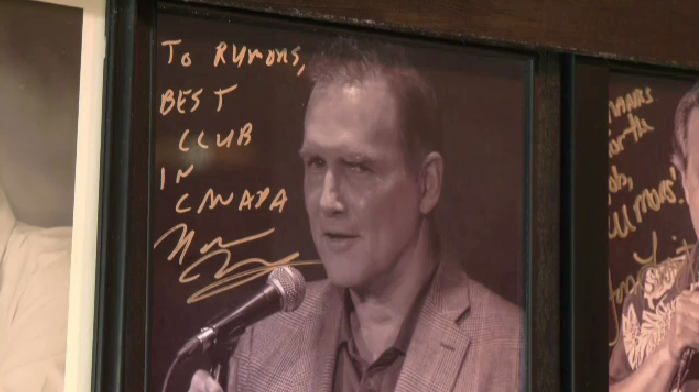 Tributes continue to pour in for legendary Canadian comedian Norm Macdonald, whose sudden passing on Tuesday was unexpected to many.

Macdonald last performed in Winnipeg back in 2018 at Rumor’s Comedy Club for a sold out eight-show stand. Demand for tickets was so high that when tickets went on sale the website crashed.

“At the time it caused a little bit of chaos, but it was such an overwhelming amount of support and how excited people were to see him in an intimate venue like this,” said Tyler Schultz, the general manager of Rumor's Comedy Club. “He was so kind, generous and gracious. It was quite an experience.”

Schultz described him as a man of the people, always willing to take time for pictures and conversations with strangers.

“He would ask them intriguing questions. It wasn’t just small talk. He genuinely wanted to know what people were about. That kind of celebrity status, and for him to be asking like our cooks and hostesses what they do during the day went a long way,” Schultz said.

One memory stands out for Schultz from about ten years ago. He had comedian Gilbert Gottfried booked at the club and Macdonald, who was performing at the Burton Cummings Theatre, had the night off.

“So he came here and then it was just me, Gilbert and Norm in the Green Room, and I just sat like a fly on the wall, just listening to these two legends," said Schultz.

Macdonald’s unique and fearless comedic style is what Shultz believes drew his legion of fans.

“He did it his way all the time,” said Shultz. “He was just unapologetic and his peers respected him so much for that. Just the outpouring of support that we saw yesterday was phenomenal and it really shows his character.”

Macdonald’s legacy will serve as an inspiration to the new generation of comedians, according to Schultz. He said his delivery was unmatched, the risks he took were huge and you can see that in the bits he did on television shows such as Conan O’Brian or Letterman.

“He’ll always have a special spot in the comedy community. Talk about Mount Rushmore – people put him up there, myself included,” said Schultz.

The Chinese military on Sunday condemned the United States and Canada for each sending a warship through the Taiwan Strait last week, saying they were threatening peace and stability in the region.

Kingston police, with assistance from the OPP riot squad and Durham Regional Police, moved in twice on Saturday to clear students from the streets and homes after declaring an 'aggravated nuisance party'.

A rowdy student party at Acadia University in Wolfville, N.S. has resulted in multiple arrests and charges as hundreds gathered in the streets for homecoming celebrations over the weekend.