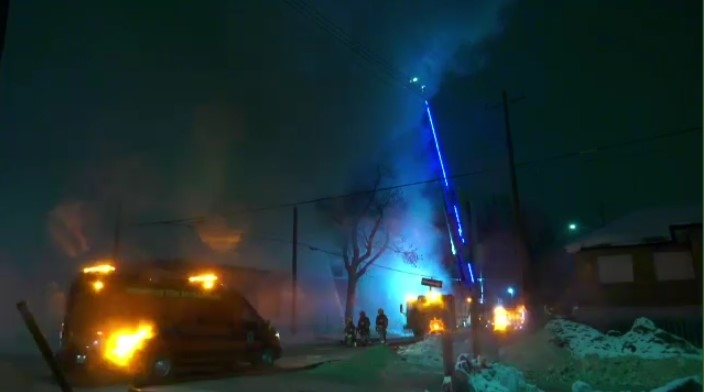 Winnipeg commuters are being warned about a fire at an apartment building Tuesday morning that has forced road closures in the city.

Crews with the Winnipeg Fire Paramedic Service (WFPS) were called to the fire at a vacant apartment building on Gertie Street around 4:45 a.m. On-duty members of the Winnipeg Police Service reported the fire.

When fire crews got to the scene, they found heavy smoke and flames coming from the building. Crews were not able to go inside the building due to the conditions, so they used aerial ladders to fight the fire.

The WFPS also used its drone to provide the incident commanders with an aerial view of the scene, which helped them direct the water streams and find hot spots. Images from the scene show that the fire appears to be extinguished.

According to the City of Winnipeg, the structural integrity of the building has been compromised due to the fire damage and arrangements are being made for demolition. Damage estimates are unavailable, but the building is considered a complete loss.

The city confirmed the building has been vacant since Sept. 7, 2022.

Gertie is closed to traffic. Bannatyne and McDermot Avenue are also closed at Gertie. People are asked to avoid the area.