WINNIPEG -- Two 18-year-olds are dead after police believe they were thrown from their car during a tornado near Virden, Man. on Friday evening.

According to RCMP, officers responded to reports of a tornado touching down near Highway 83 and Road 50N in the Rural Municipality of Pipestone, located approximately 16 kilometres south of Virden, around 8:10 p.m.

RCMP said a farm property had suffered extensive damage from the tornado and that two vehicles had been carried away and thrown into a nearby field.

After searching the first vehicle, found closer to the highway, officers located a 54-year-old man, from the Sioux Valley Dakota First Nation. He was taken to hospital with serious but non-life threatening injuries. 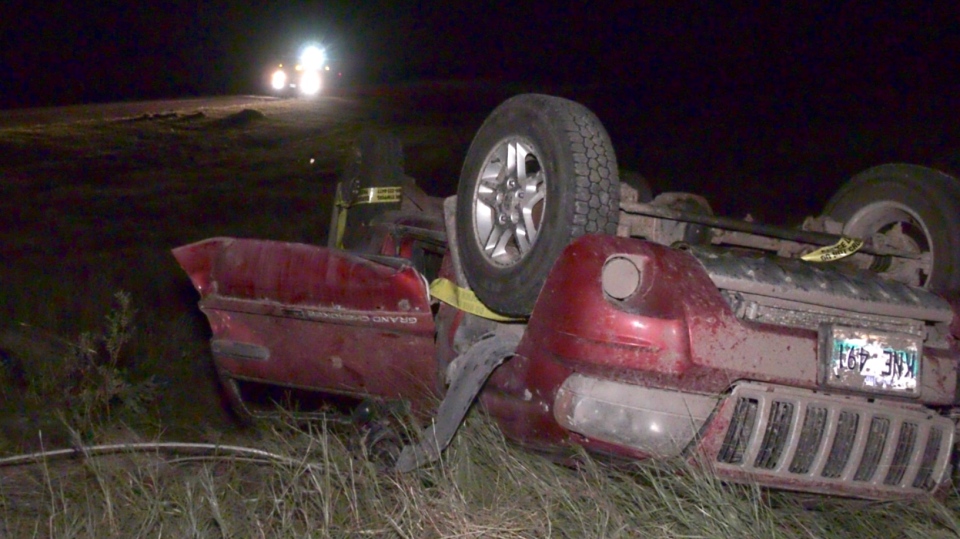 RCMP believe the pair were ejected from the vehicle during the storm.

Officials called STARS Air Ambulance to assist with the flipped car, but a spokesperson said the organization cancelled the mission since it wasn't required.

RCMP continued to search the area for other possible victims, but none were located.

Sean Schofer, a storm chaser from Saskatchewan, said he watched the tornado rip through a farm and throw a few vehicles.

"It threw two different vehicles, one into the ditch. There were two occupants trapped in there," he said. "Plus, there were downed power lines around the vehicle also, so that hampered the rescue operation.

"About 200 yards from the [other] field, it threw another vehicle into the ditch," he added. "Unfortunately, as it threw [the car], its occupant [were] thrown from the vehicle."

Schofer said this particular tornado was one of the largest he's ever seen in western Canada.

Aaron Jayjack, who is also a storm chaser, said he knew a tornado was coming when he started to hear the roar of it develop.

"This funnel came down, and it fully condensed down in the field," said Jayjack.

He added the twister was on the ground for about 10 to 15 minutes.

The tornado toppled over and crushed several grain bins.

More damage from the tornado in the community of Scarth, Man. You can read more about the twister here: https://t.co/Jl9JthnCFt @ctvwinnipeg #mbstorm pic.twitter.com/OcIlTTGNys

The company has about 30 staff working on repairs and is hoping to restore power to all customers by Saturday evening.

#mboutage VIRDEN UPDATE We’re assessing damage from last’s Tornado. All but a half dozen customers are restored. Fortunately, the tornado missed critical transmission lines, but we have to replace a number of wood poles and power lines to get all customers restored. pic.twitter.com/MvzQAUHM8N

Manitoba Hydro spokesperson Bruce Owen asks people that if they see any power line equipment blown away from the storm, to call 1-888-624-9376.

Environment Canada said the tornado was an EF2 and produced 190 kilometre per hour winds.

Tornados are measured on the Enhanced Fujita scale, ranging from a mild EF0 tornado to a devastating EF5.

The weather service told CTV News the tornado started from a severe thunderstorm that produced hen egg sized hail, about five centimetres in diameter, in Virden at 7:48 p.m.

-With files from CTV's Devon Mckendrick and Danton Unger