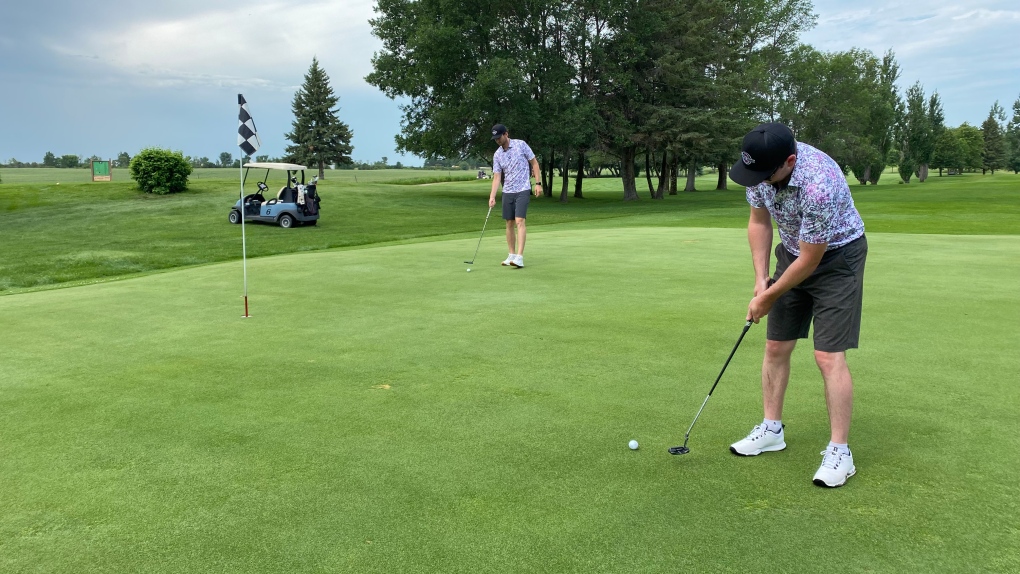 Dylan Thornborough and Patrick Law are trying to golf more than 210 holes in a day for charity. (Source: Marathon Monday Fundraiser)
WINNIPEG -

Hitting the links for a round of golf on a Monday sounds like a leisurely afternoon, but for two golf enthusiasts trying to raise money for charity, it's a gruelling marathon of more than 200 holes.

"Both of us were fairly avid golfers when we started this, and both of us are going through the professional golf management program to be golf professionals. So we wanted to do something with our passion and create some good out of it," said Law.

Come Monday, July 5, the pair will take their clubs to Glenboro, Man., to try to beat the record 210 holes of golf they set last year.

Over the nine years of running the fundraiser, the two men have raised around $90,000. This year, with it being the tenth anniversary, Law and Thornborough hope to cross the six-figure mark.

"We came into this with fairly modest expectations and people's kindness has blown us away," said Law.

The fundraiser is very special to the golfers, as both have experienced cancer in their lives.

"Shortly after that, my grandmother died of cancer, so it's definitely near and dear to our hearts," said Thornborough.

On top of the marathon golf game on Monday, the two organize a day open to anyone wanting to raise money.

"We do an event the day before called Sunday Funday," said Thornborough. "So we have people playing whatever amount of golf they want to play on the Sunday before we go out. We had some guys and gals play close to 100 holes themselves and raising money themselves."

People who join the game can choose what type of cancer research they are supporting. Law's fundraising supports breast cancer like his mother had and Thornborough's funds go towards uterine cancer research in memory of his grandma.

CTV News Winnipeg caught up with the golfers partway through the marathon.

"We are 99 in now, so getting close to halfway," said Law around noon.

The two said they were still going strong despite the heat.

"We're not keeping cool, but we are drinking as much water as possible and staying hydrated," Law said.