Two people arrested after Sunday afternoon assault at The Forks 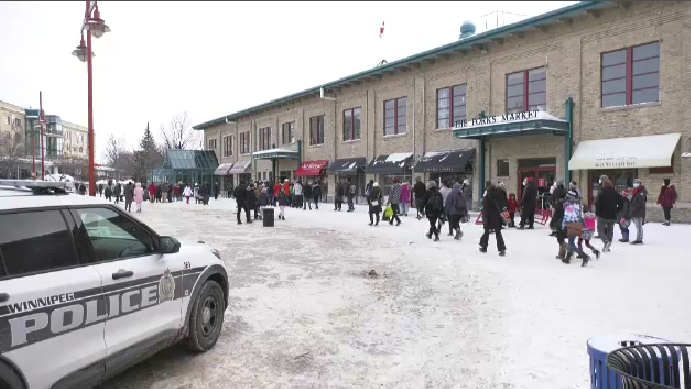 Police were called to The Forks after an assault Sunday afternoon. (Source: CTV News/Mike Arsenault)
WINNIPEG -

Two people have been arrested after an assault at The Forks Sunday afternoon.

According to the Winnipeg Police Service, officers were called to The Forks at 12:36 p.m. for a report of an assault.

WPS said officers found an injured man once they arrived. He was taken to a hospital in stable condition.

A section inside The Forks Market was taped off while police were on scene.

Shortly after, a large police presence could be seen at a Manitoba Housing building at 375 Assiniboine Avenue.

Police said two suspects were taken into custody at the building.

WPS said members of the Major Crimes Unit are continuing with the investigation.

Police: Buffalo gunman aimed to keep killing if he got away

The white gunman accused of massacring 10 Black people in a racist rampage at a Buffalo supermarket planned to keep killing if he had escaped the scene, the police commissioner said Monday, as the possibility of federal hate crime or domestic terror charges loomed.

A driver who struck and killed a woman and her three young daughters nearly two years ago 'gambled with other people's lives' when he took the wheel, an Ontario judge said Monday in sentencing him to 17 years behind bars.

Facing daily instances of violence and abuse, gender diverse people in the Canadian prison system say they are forced to take measures into their own hands to secure their safety.

The Ontario election leaders debate is happening on Monday night. Here's how to watch it live.

'Aquaman' actor Amber Heard told jurors in a defamation case on Monday that she filed for divorce from Johnny Depp in 2016 because she worried she would not survive physical abuse by him.

Moscow suffered another diplomatic setback Monday in its war with Ukraine as Sweden joined Finland in deciding to seek NATO membership, while Ukraine's president congratulated soldiers who reportedly pushed Russian forces back near the border.