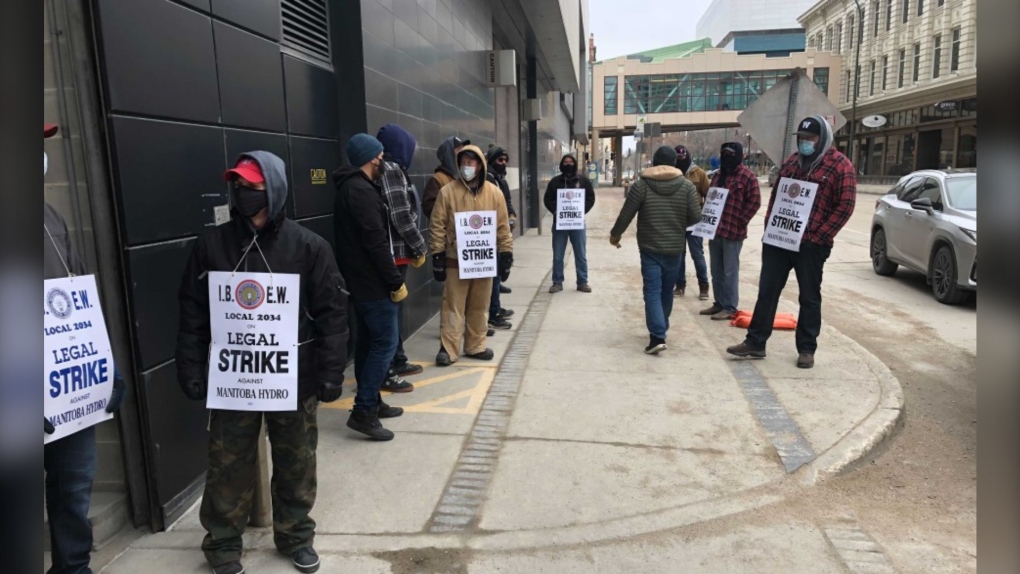 WINNIPEG -- Members of local 2034 of the International Brotherhood of Electrical Workers (IBEW) took to the picket line Wednesday morning outside Manitoba Hydro headquarters in downtown Winnipeg.

"Manitoba Hydro has contingency plans in place to ensure it can continue to provide its essential and emergency service to customers and maintain public safety around its facilities and infrastructure," said Bruce Owen, media relations officer, in an email.

Owen said IBEW turned down a three-year contract which featured a 0.75 per cent wage increase in the third year retroactive to Jan. 1, 2021.

On the picket line Wednesday, IBEW 2034 business manager Michael Espenell told CTV News the union is striking to achieve cost-of-living or as he put it, ”anywhere close to that.”

“Right now, we’ve been offered zeroes and rollbacks. We took a rollback in 2020 so essentially we’re working in the negative on a three-year deal,” Espenell said.

“A lot of our members are two-income families, so this essentially takes a second leg out from underneath them.”

Hydro’s statement went on to say the offer the Corporation put forth followed months of negotiations, most recently conducted with the aid of a conciliator, while abiding by the financial mandates provided to Manitoba Hydro by the provincial government.

The contract also said no IBEW employee would be laid off if their position were eliminated due to contracting out work which would normally be performed by the employees for the fiscal year ending in March 2022.

The workers were also offered a one-time allocation of 80 hours to sick leave balances for those who worked 30 per cent of their time in the field in the 2020-21 fiscal year and a fitness subsidy for the 2021 year increasing the amount by $100 to $350.

- With files from CTV's Ken Gabel and Devon McKendrick