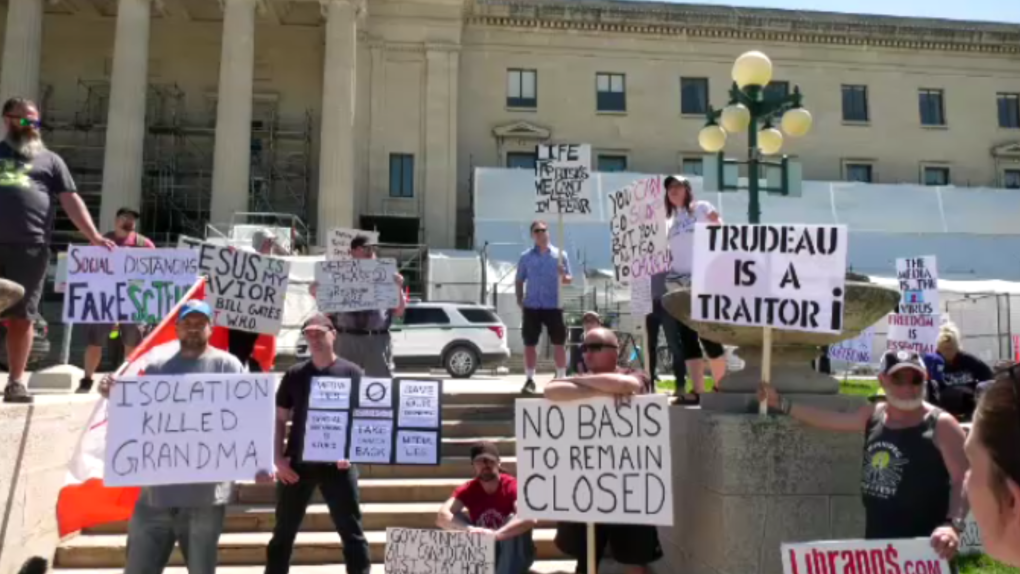 Protesters attended an anti-lockdown rally at the Manitoba Legislative Building on May 30.

WINNIPEG -- For the second time this month, protesters assembled at the Manitoba Legislative Building Saturday afternoon, demanding an end to the COVID-19 lockdown.

"There's many people who we tried to protect at the beginning by keeping them away, keeping them safe. Those are the people who are falling ill or dying of loneliness, broken hearts," he said.

Phase two of the province's Restoring Safe Services plan is set to start on Monday.

Allard went on to question why the province extended the state of emergency and why strict guidelines are still in place.

"What Brian Pallister and Dr. Roussin are doing right now is unjustifiable," said Allard. "I'm calling on them to justify the extension of the state of emergency."

At the rally, one protester called physical distancing fake science.

Allard believes guidelines like public gathering limits should be lifted and left up to common sense.

"People need to make their own choices, they're not stupid," he said.

A similar protest was held in Winnipeg on May 9.

"We don't want this kind of lockdown and assassination on our economy like we're seeing right now," said Bohemier at the protest on May 9.

The rally in Winnipeg remained peaceful but did attract a few counter-protesters.

-With files from CTV's Kayla Rosen and Touria Izri