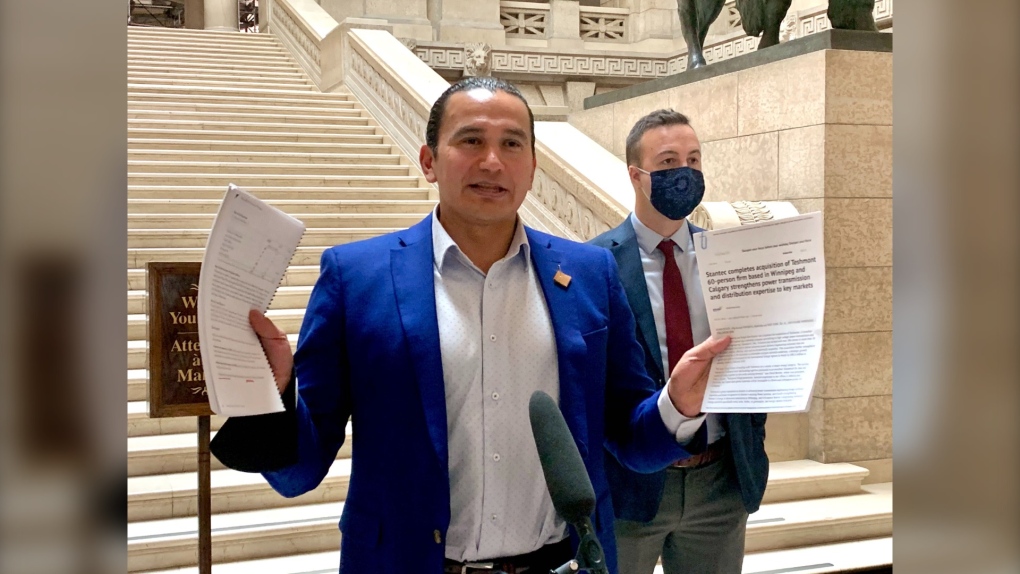 WINNIPEG -- The Manitoba NDP is calling out the Pallister government for the sale of a subsidiary which was owned by Manitoba Hydro.

Teshmont was sold to Stantec on Thursday, with NDP Leader Wab Kinew saying this is the first step from the government to privatize Manitoba Hydro.

Kinew said in Hydro's annual report, which was released earlier this week, the Crown corporation was listed as the owners of Teshmont.

He said this is concerning because Manitobans have invested in the Crown corporation to keep their bills low.

"It's a very dark day in Manitoba history."

Kinew said Teshmont has contributed millions of dollars to Hydro, and because of that, it was helping keep bills low for Manitobans.

He added that he has written to Brian Pallister to confirm in writing that the government will not sell any other pieces of Hydro.

The NDP said they are planning to introduce legislation that would require Manitobans to vote before any piece of Hydro is planned to be sold.

"The thing that is really disappointing about this that these are profitable Manitoba companies. Local ownership matters and that's something Brian Pallister doesn't seem to understand," said Lamont.

He said the benefits of Teshmont will no longer benefit Manitobans and it will now go somewhere else.

Lamont added that who owns these companies and where they are owned is important.

CTV News reached out to the province about the sale who said it didn't have a response "as the government had no role in this decision," a spokesperson said.

In an emailed statement to CTV News, Manitoba Hydro said it was selling its 40 per cent stake in Teshmont and no job losses have occurred at Hydro.

"Further, this sale has no impact on Manitoba Hydro's operations. Manitoba Hydro purchased a share in Teshmont in 2002 to ensure local high voltage direct current expertise was available to act as the owner's engineer for the engineering and construction of the Bipole III transmission line and its two converter stations," a spokesperson said.

The spokesperson added that the Bipole III went into service in 2018 and the Crown corporation decided it was now the right time to "divest itself of its share in Teshmont."

In the statement, they added this was just a business decision and not the privatization of Manitoba Hydro.

"To link the two is erroneous and factually inaccurate. Please note government had no role in this decision."