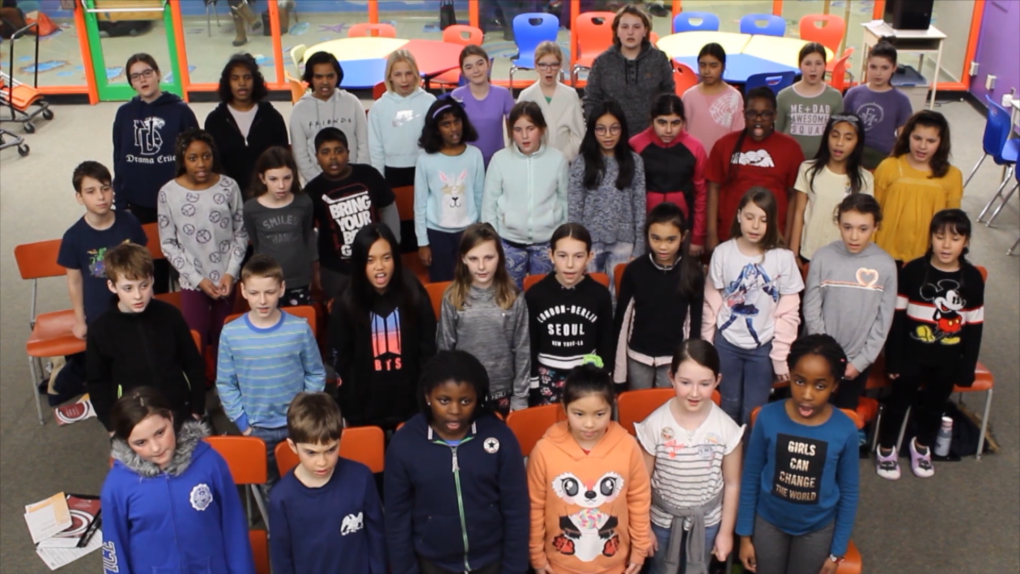 A file image of a children's choir.

WINNIPEG -- Dozens of tuxedo-clad men and women wearing gowns line the risers. With a flick of the conductor's wrist, a wave of sound envelopes the packed concert hall.

Describing a typical show for the Winnipeg Philharmonic Choir, it's an experience that won't happen again for a while.

COVID-19 has forced choirs across the world to disband and file away their sheet music.

"For now, our choir is just on hold," said Judy Asker, executive director of the Winnipeg Philharmonic Choir.

The choir had to cancel its two spring concerts, a common occurrence in the music world right now.

According to the National COVID-19 Impact Survey for Choirs in April, over 300 events were cancelled, and over 2,000 postponed. In total, 211 Manitoba choirs responded to the survey.

Overall, the total estimated and actual financial impact on these choirs is over $850,000 in lost revenues and incurred costs associated with the pandemic.

"Because choirs themselves are inherently social gatherings of several or more people, every choir across the country had to cease operations immediately, and in order to connect with its choristers and its patrons, has had to adapt to a new normal that exists almost entirely online," said Jenny Steinke-Magnus, the executive director of the Manitoba Choral Association.

The Manitoba Choral Association provides resources and opportunities to choirs, so if they can't perform, it puts the organization in jeopardy.

"We are very worried about the impacts that the pandemic will have on MCA's membership numbers, programs, events, and finances in the long-run," Steinke-Magnus said.

With a cancelled spring season, the Winnipeg Philharmonic Choir has had to rely much heavier on patron donations instead of ticket sales.

The choir's website said it is heartened by the many kind emails and well-wishes they have received.

THE URGE TO SING

Without choir rehearsals, choristers are left longing for their chance to sing.

The last time soprano Sydney Clarke performed was back in January with Camerata Nova.

"It absolutely kills me, being in a choir is something that you can't really replicate," she said. "The camaraderie, tuning into someone else, and really feeling like you're a group making beautiful sounds in harmony."

Singing since she was a child and attending post-secondary for further musical education, Clarke has a passion for music.

"Choirs are so important to Winnipeg's musical tapestry, and I hope we'll all be together soon," she said.

Although excited to get back to singing in an ensemble, the idea of possibly spreading the virus to others makes her nervous.

Despite the second phase of the province's reopening plan starting Monday, it is unlikely choirs will start back up.

"The provincial government is still not allowing choirs to gather: as per their Phase 2 Plan for Restoring Services on June 1 lists choral singing as being a risky activity, particularly in comparison to other recreational activities that have permission to reopen or expand their capacity," said Steinke-Magnus.

Looking at further down the road, Asker is beginning to make plans for restarting the Winnipeg Philharmonic Choir.

"We are thinking sectional rehearsals, that way we'd be able to do them with the social distancing rules," she said.

Asker noted that around half of the choir's members are over the age of 60, meaning they're in the high-risk group for COVID-19.

"We are being very cautious as we move forward," said Asker. "We just want everyone to feel secure and safe."

With many factors still up in the air, there's no definite timeline for when choirs will be able to reassemble.

With much uncertainly, the MCA is watching the choir scene very closely.

"We are unsure how this pandemic is going to affect Manitoba Choral Association and its members in the long-term," said Steinke-Magnus.