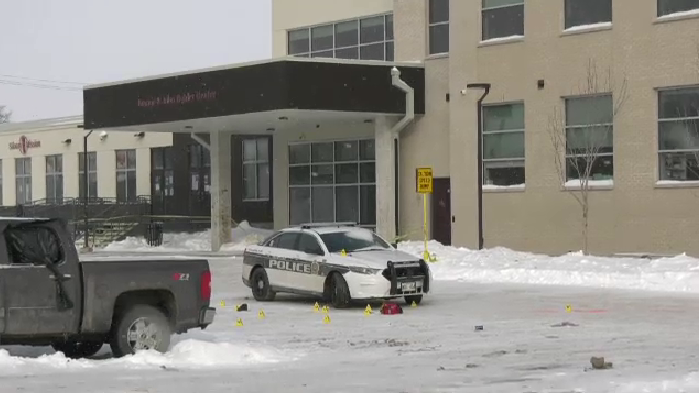 Manitoba's police watchdog has wrapped up two separate investigations into police shootings, determining the officers involved in both will not face charges.

The Independent Investigation Unit of Manitoba (IIU) said the first investigation began following a police shooting that happened on Jan. 28, 2022.

The IIU said police were called around 11 p.m. to the parking lot of Siloam Mission because of an ongoing fight. When officers arrived, they found a man who had been stabbed multiple times, and another man who was armed with a knife.

During the investigation, the IIU said it determined the man armed with the knife had been seen repeatedly stabbing another man.

"(He) refused to comply with verbal directions to drop the knife and became involved with another police officer while swinging the knife at the officer," the IIU said in a news release.

The IIU said an officer shot the man several times with his service pistol, because he feared the man could have potentially lethally injured them.

The man was taken to the Health Sciences Centre with a gunshot wound to his head and to his hip.

The IIU said investigators met with the man who had been shot, but said he was unable to participate in any interviews due to his level of competency.

MAN WITH GUN SHOT BY POLICE AFTER POINTING FIREARM AT OFFICERS: IIU

The second investigation began following a police shooting that happened on July 13, 2022.

Around 3 p.m., police were called to a home on Gertrude Avenue where officers found a man in front of the home armed with a firearm.

"Officers attempted to de-escalate the situation by negotiation," the IIU said in a release, adding police used a Taser to try to disarm the man.

The IIU said the man then pointed the firearm at police, which is when one of the officers shot him.

Officers restrained the man and he was given first aid before he was taken to hospital in unstable condition. He was later upgraded to stable.

During the investigation, which included reviewing police reports and notes, 911 audio recordings, and multiple videos, police interviewed 10 witness officers, nine civilian witnesses and the man who had been shot by police.

NO REASONABLE GROUNDS FOR CHARGES: IIU

In both investigations, the IIU has said investigators concluded there were 'no reasonable grounds' to charge the officers involved.

The full reports into the two shootings will be released once the charges against the suspects are dealt with in court.

'This is too much': B.C. mom records police handcuffing 12-year-old in hospital

A review has been launched after police officers were recorded restraining a handcuffed Indigenous child on the floor of a Vancouver hospital – an incident the Union of B.C. Indian Chiefs has denounced as "horrendous."

Grizzlies, other NBA teams speak out on Tyre Nichols' death

The outrage, frustration, sadness and anger was evident around the NBA on Friday, the day that video was released showing how Nichols, a 29-year-old father, was killed by five Memphis police officers. Several teams released statements of support for the family, as did the National Basketball Players Association.