Water bombers called in to help with wildfire near Breezy Point, Man. 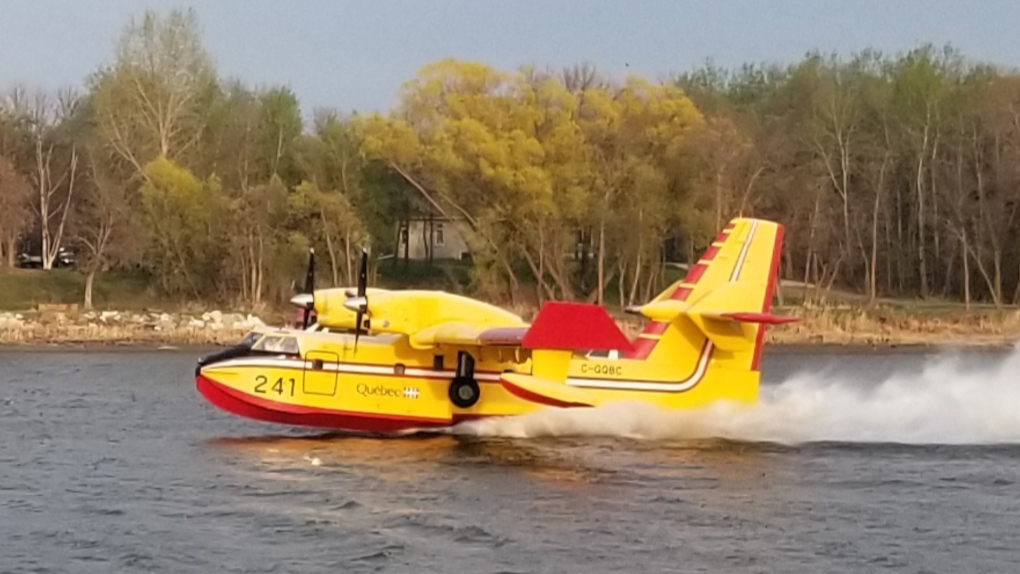 A water bomber is pictured on the Red River north of Selkirk on Sunday, May 16, 2021. (Source: Karen Fey)

WINNIPEG -- Water bombers have been called in to assist with a wildfire burning near Breezy Point, Man.

An official with the RM of St. Clements tells CTV News the fire is burning on Crown land, which is adjacent to the RM.

“As of today, we discovered that the fire did spread a little further,” said Joshi, who noted Manitoba Conservation has been monitoring from the air as well.

Joshi wasn’t able to say how large the fire has grown, as crews have only be able to get within approximately 3.5 kilometres of the fire so far.

“It looks like it’s on the river banks,” said Joshi. “It may be spreading into some of the forested areas, but we can’t tell at this point.”

He said crews suspect the fire was human-caused, though it will still take some time to determine. At this point, no residential properties are at risk of the fire.

A burn ban was put in place for the RM of St. Clements on May 6. Four days later, the Manitoba Wildfire Service implemented additional fire and travel restrictions, which were then upgraded by the province on Thursday.

The restrictions prohibit all fires in the areas north of Provincial Road 317 to the beaches area, which includes provincial parks.

“We’re in very dry conditions, and under these conditions, there should be no fires especially in open areas,” said Joshi.

“I think it’s important for people to realize that we’re in very dangerous conditions, and we need to keep ourselves safe and not put individuals and property at risk by having these fires.”

On Monday morning, the RM of St. Clements said the community continued to monitor the fire, noting a second blaze flared up and started moving to the south.

“The water bombers continued to work till 9pm on Sunday which put out the second fire, as it was beginning to head in the direction of some homes (approximately 2 homes in the area),” the RM said in a statement. “Our firefighters did some controlled back burning to protect the properties and once the fire was put out by the water bombers we were able to go in and address any hot spots.”

The original fire is burning north, but it is now moving towards water, the RM said, noting they’re using a drone, firefighters and other methods to monitor the fire.