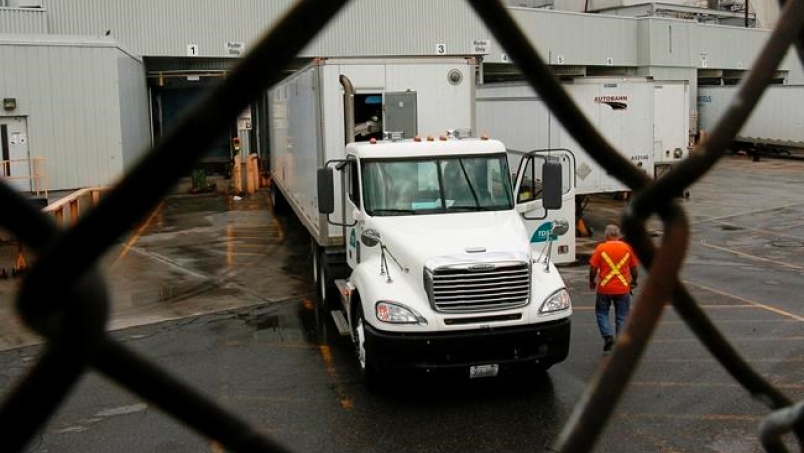 A driver pulls into the truck delivery bay at the General Motors plant in Oshawa, Ont., Tuesday, September 25, 2007. THE CANADIAN PRESS/J.P. Moczulski

Manitoba’s top doctor is calling on some medical professionals to stop stigmatizing people based on their occupation, after receiving reports that truckers were denied medical appointments and flu shots over COVID concerns.

Dr. Brent Roussin, the chief provincial public health officer, said the province has received reports of some truckers in Manitoba being turned away while going in for a medical appointment or to get the influenza vaccine.

“It is disappointing to hear of recent medical services being denied to individuals because of their line of work,” Roussin said.

“We can’t accept this. We know this virus will be here for the foreseeable future, so we can’t deny people service based on their occupation. We need to live with this virus and deal with it.”

He said in many cases, the people who are being denied service are the ones providing ‘tremendous’ services to Manitobans.

Terry Shaw, the executive director of the Manitoba Trucking Association (MTA), said he has received about six reports in the past three weeks of truckers who, despite having no symptoms of COVID-19, were denied service at their doctor’s officer, dentist, or flu clinic.

“Because they haven’t self-isolated for 14 days after being outside of the province, even though they are outside the province as an essential service worker,” Shaw told CTV News.

Under Manitoba’s current public health orders, people transporting goods, such as truckers and pilots, are not required to self-isolate for 14 days when returning to the province.

“Manitobans are being told to stay home so they can stay safe, and the reason we are all able to do that is because truck drivers aren’t,” he said.

“The only thing they ask for in return for the work they do that takes them out of province is to know that when they come home for their time off, they will be able to access medical services in a timely and reasonable fashion just as every Manitoban expects.”

Shaw said this is not the first time in the pandemic that Manitoba drivers have faced COVID-19 stigma.

“This has unfortunately been going on for eight months now,” Shaw said, adding in the early days of the pandemic, they received reports of truckers being denied service at restaurants and grocery stores due to fear they may have COVID-19.

“Unlike what we were seeing previously – these aren’t frivolous concerns. It is not somebody being denied a hamburger or a cup of coffee – which is bad enough and inconvenient enough,” Shaw said.

“These are people being denied healthcare services.”

He said the MTA has reached out to the College of Physicians and Surgeons of Manitoba, and the Manitoba Dental Association, asking them to give a ‘friendly reminder’ of the current public health orders so they don’t deny service to people simply because they are truckers.