The City of Winnipeg has begun cleaning up two large homeless camps that became submerged by high water this fall.

Underneath both Osborne and Maryland bridges there are tents, furniture, food, clothing and many household items.

The city said following consultation with Main Street Project and Winnipeg Police Service, it got to work on the cleanup at these locations because of a lingering fire risk.

“However crews were unable to complete the cleanup upon first pass due to high river levels and unstable ground on the riverbank. The crews are assigned to these two areas, and will complete the cleanup as soon as conditions allow,” the city told CTV News in an email Friday.

The city said residents who come across an accumulation of debris outside these locations along the city’s riverbanks or on any other public property are asked to make a report to 311.

MANY RIVERBANKS IN WINNIPEG ON PRIVATE PROPERTY: CITY

City said it is only responsible for cleaning up abandoned materials on public property and many of the riverbanks in Winnipeg are actually private property.

“The City has no jurisdiction on private property, therefore cleanup of these locations would be the responsibility of the property owner,” the city said.

On Friday, CTV News went out with a crew of volunteers from the St. Boniface Norwood Preservation society.

Many of the items being removed are heavy from water or stuck in mud. Other items, including furniture, can’t be reached by crews because high water has partially swallowed them up.

Avery Ross said his crew learned about the mess in St. Boniface online and wanted to do something about it. Last week they cleaned a section of the Red River along Lyndale Drive.

This week, they tackled one of about five abandoned camps along Tache Avenue near the Provencher Bridge.

Ross said St. Boniface Street Links confirmed the camps are vacant, and there is an urgency to get the cleanup done.

Ross said he empathizes with people in the neighbourhood who want to see the riverbank clean and free of hazards like needles and people who use the riverbanks as a place to live.

“I think anyone should be down here cleaning up. Anyone that has time in their lives” could give them a hand, he said.

The City of Winnipeg has begun cleaning up two large homeless camps that became submerged by high water this fall. 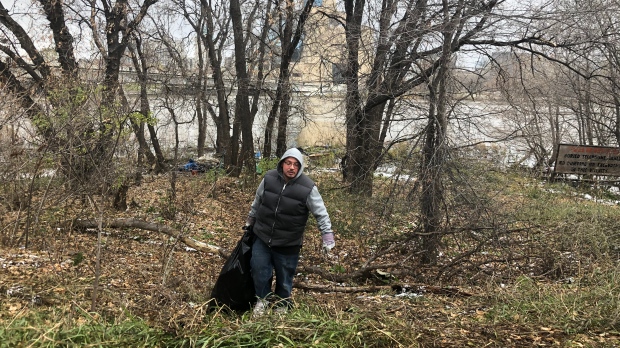 The city said if debris is on public property and is confirmed as garbage or abandoned belongings, the city will assign a crew to clean it up.

If there is any question of whether the area is inhabited, it refers the location to Main Street Project, which will provide people with appropriate supports and assist them in finding alternate housing.