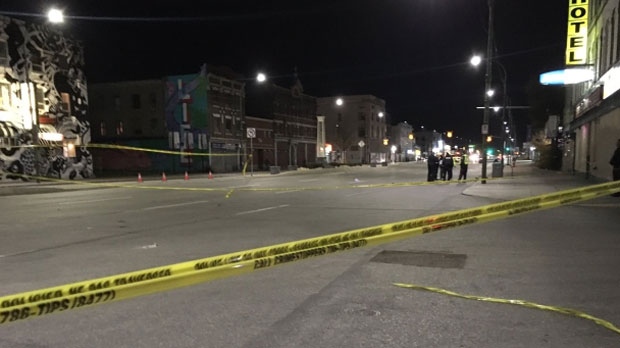 File image of the scene of the crash, at Main Street and Sutherland.

WINNIPEG -- Relatives of a pedestrian struck by a Winnipeg police officer told a sentencing hearing they are hurt that the constable drove off and left him dying on the road.

A provincial court judge agreed to a joint-recommendation by lawyers and sentenced Holz to 30 months in prison.

"I think about the accident everyday," the married father told court as members of Severight's family wept.

Gloria Lebold said outside court that she believes Holz is remorseful but the callous way her grandson died has destroyed her family.

"(Holz) can go home to his family but we lost Cody forever," said Lebold.

"That is my biggest hurt -- my grandson lying there when he drives away."

Court heard that Holz was off-duty when he met with colleagues at a bar just before 5 p.m. He drove out of a nearby car park about three hours later.

As he made his way through downtown, investigators calculated he was driving up to 92 km/h in a 50 km/h zone.

An agreed statement of facts said Severight and another person were crossing a street as Holz sped in their direction. Holz avoided driving into the other person but hit Severight while going at least 76 km/h.

Severight was propelled across the road. His skull was fractured and his neck was broken.

Holz didn't stop. He continued to drive, increasing his speed up to 129 km/h.

About 12 minutes after the collision, parked at a different location, Holz called police and said he had hit someone.

Severight was taken to hospital but died of his injuries.

While it was noted that Holz smelled of alcohol, a breathalyzer test done more than an hour after the collision found he was within the legal limit.

Two officers were placed on administrative leave after their conduct was questioned in the case, but the Independent Investigation Unit of Manitoba later concluded no charges against those officers would be laid.

Holz originally faced other offences, including impaired driving. Those charges were stayed after his guilty plea.

Police chief Danny Smyth said in a statement after the sentencing that Holz is no longer employed with the force.

"I want to express our sympathies to the family of Cody Severight, and hope that they are provided some comfort in the knowledge that they were spared the anguish of a trial," he said.

Nancy Gabriel, Severight's aunt, said in a victim impact statement read into court that her family has lost trust in police and the justice system.

"I was so angry because cops are supposed to protect people, not leave them dead on the side of the road," she said.

This report by The Canadian Press was first published Oct. 30.