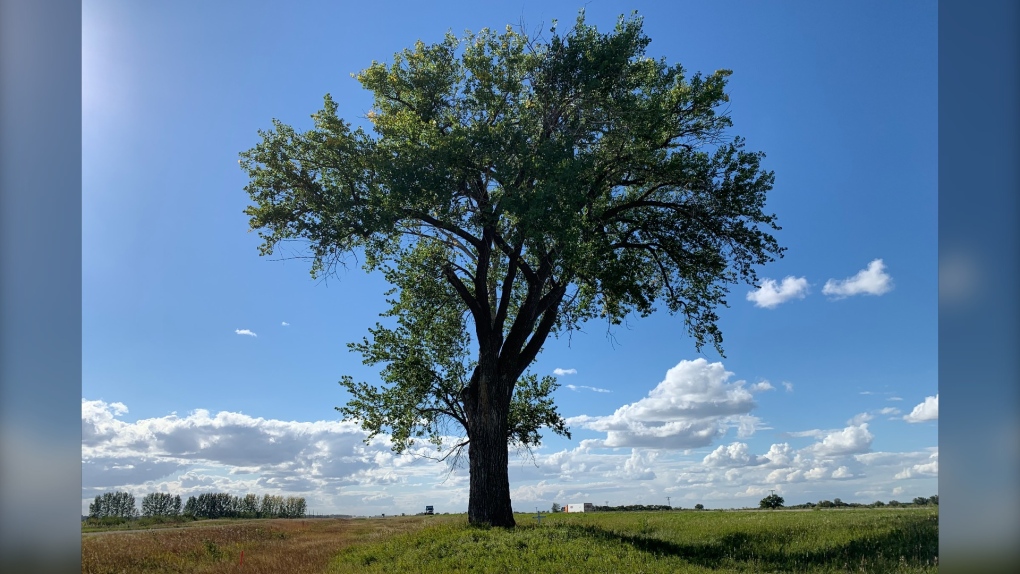 The Halfway Tree stands on the north side of Canada's number one highway – about an eight-minute drive east of MacGregor - roughly the halfway point between Winnipeg and Brandon. (Source: Danton Unger/CTV News Winnipeg)

Rooted on the side of the Trans-Canada Highway, a century-old Cottonwood Tree has stood as a marker to countless Manitobans letting them know they have almost made it – they are halfway home.

The Halfway Tree stands on the south side of Canada's number one highway – about an eight-minute drive east of MacGregor - roughly the halfway point between Winnipeg and Brandon.

Carl Epp, owner of Parkland Tree Care, said he was recently contacted by residents who live near the tree and asked to assess its condition.

He said the tree – an eastern cottonwood poplar – stands about 85 feet tall and has two main trunks.

"One of those main trunks died back quite a long time ago, and that's still sitting there in the tree, it hasn't been removed, it hasn't fallen off," he said. "The other half of the tree is doing quite well. It's got lots of good healthy foliage." 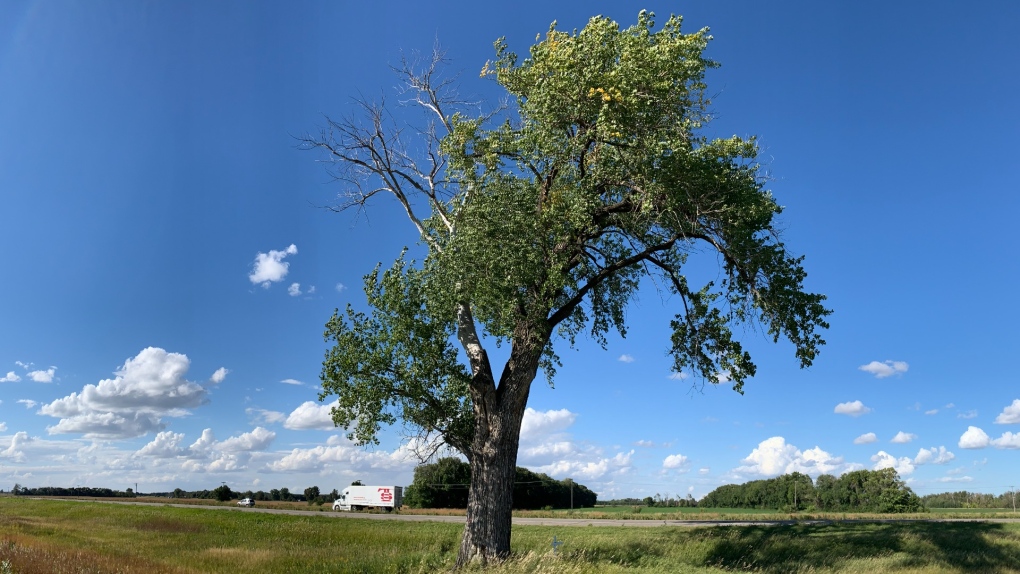 The Halfway Tree stands on the south side of Canada's number one highway – about an eight-minute drive east of MacGregor - roughly the halfway point between Winnipeg and Brandon. (Source: Danton Unger/CTV News Winnipeg)

Epp said the tree is credited to have been planted around 1919 by an area farmer as a memorial to his wife and baby child who died in labour. He said given the species of tree and the fact it has been growing for more than a century, it is doing well.

"That's well advanced for a cottonwood tree – there's not many that grow to be that old," he said. "An oak tree – they put a lot of energy into defence of decay and rot and so on, and insects and diseases. But poplars don't do that. They put more effort into just growing."

Epp said on the healthy side of the tree, the leaves show no signs of insects or decay. However, there are some overextended branches that need to be pruned. He said the dead trunk will likely also need to be removed.

"That will hopefully lower the risk that this tree poses to people that visit it and also to the highway."

A provincial spokesperson told CTV News that Manitoba Transportation and Infrastructure reviewed the assessment of the tree and will look after the trimming of the tree at the right time of year.

They said there are actually two 'Halfway Trees.' A willow tree planted about nine kilometres east of the cottonwood tree on the north side of Highway 1 is, according to the province, a designated heritage tree.

The cottonwood tree is not actually the provincially designated 'Halfway Tree.'

"While this one is not registered as a heritage tree, it is well loved and recognized by many as the 'halfway tree,'" the spokesperson said in an email.

The tree is indeed well loved by Manitobans.

It has a fan club group on Facebook with more than 1,900 members. It has inspired artists, photographers and musicians - one of whom wrote a song about the iconic marker. Epp said during his assessment he found knick-knacks perched in the tree's branches or nestled in its bark – evidence of its impact on people's lives.

"There was a geocache there. Someone has left some full beer bottles… there was some kind of alcohol," he said. "Someone stuck an old-fashioned lighter into a crevice of the bark. There were some interesting little things that have been left there with the tree."

When the iconic halfway trees do eventually die, a provincial spokesperson told CTV News they can't be replaced.

"We hope that those concerned with the health of these large trees understand that it is not possible to plant new trees that are in close proximity to the highway as they could pose a safety risk to the travelling public," the spokesperson said in an email. 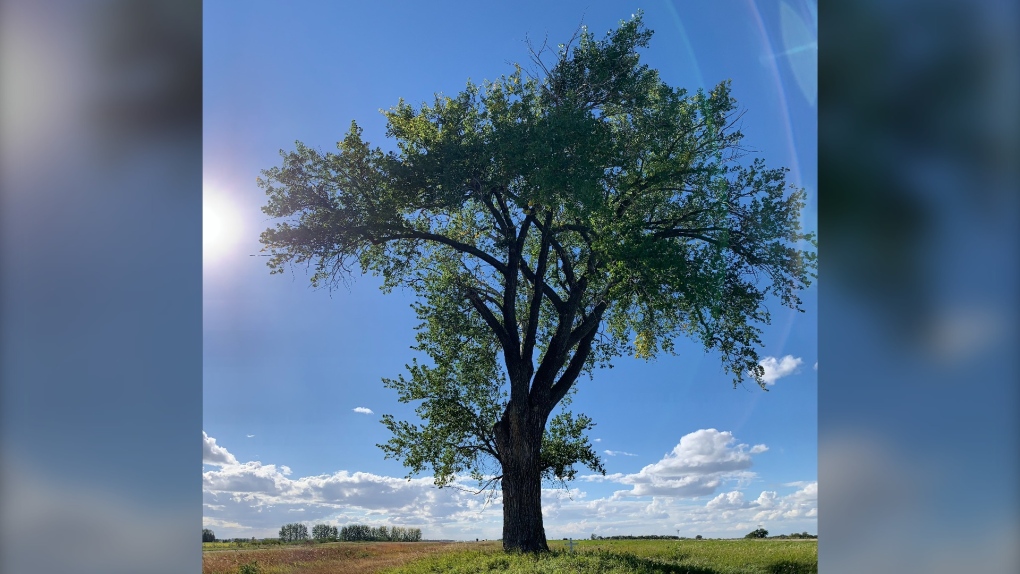 The Halfway Tree stands on the south side of Canada's number one highway – about an eight-minute drive east of MacGregor - roughly the halfway point between Winnipeg and Brandon. (Source: Danton Unger/CTV News Winnipeg)

As for how long the tree has, Epp says it is hard to say.

"You cannot put a timeline on how long this tree has – it could live for many years, (or) something catastrophic could happen tomorrow to it," he said. "It could live quite a long time. It needs to be monitored frequently, like it needs to be monitored probably once a year, just because of the state of the tree and the location of it, to make sure that something hasn't developed in the meantime."

He said even with proper pruning and regular monitoring, there is no such thing as a risk-free tree.

"Every tree, given enough wind and enough precipitation – whether it's freezing rain or wet snow or waterlogged soils – will fail," he said.

"We're trying to mitigate those risks to make sure that it can live as long as possible without something catastrophic happening to it."