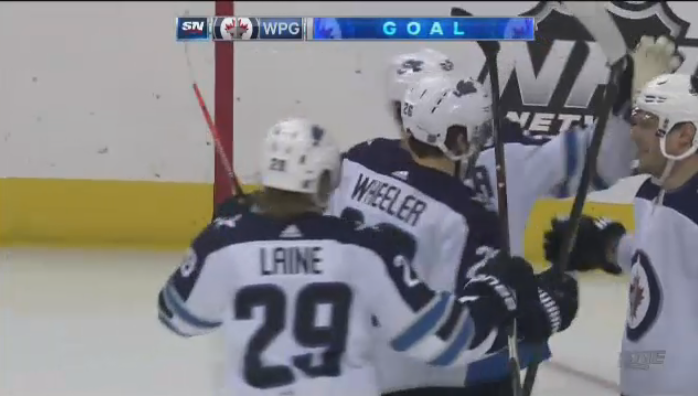 Blake Wheeler scored four goals against Columbus, but it was the Winnipeg captain's prettiest of the evening -- a well-placed shot on an odd-man rush late in the game -- that really deflated the Blue Jackets.

COLUMBUS, Ohio -- Blake Wheeler scored four goals against Columbus, but it was the Winnipeg captain's prettiest of the evening -- a well-placed shot on an odd-man rush late in the game -- that really deflated the Blue Jackets.

The goal off Patrik Laine's feed with 2:13 left put the Jets up 4-2, and Wheeler added an empty-netter with 34 seconds left on the way to a 5-2 win over Columbus on Sunday night.

Wheeler was in the right place at the right time on the first two goals, getting deflections off the sticks of teammates shooting from the point.

"You want to contribute," said Wheeler, who has 80 points this season. "That's the biggest thing. That's the goal for our line every night is to contribute in some fashion. Obviously, the scoresheet is part of our job, (but) I think we pride ourselves on all the little details of the game."

Connor Hellebuyck, who missed Friday night's game with the flu, had 40 saves, and Sami Niku scored the only non-Wheeler goal for the Jets, who won their second straight and stayed in first place in the Central Division despite being outshot by Columbus 42-26.

Sergei Bobrovsky had 21 saves, and Nick Foligno and Seth Jones scored for the Blue Jackets, who lost the second game of a home back-to-back despite playing much better than in the 4-0 defeat by Edmonton on Saturday. The losses kept them below the wild-card line in the Eastern Division.

"It's hard to pick that game apart, because I thought we did a lot of good things," said Foligno, who had a bare-knuckled fight with Jets defencemen Dmitry Kulikov in the second period. "We dictated play for a lot of it. It's not a good feeling. We need results right now."

Niku got his first goal of the year and the second of his career, a snipe over Bobrovsky's glove from the point 2:21 into the game. Foligno evened the score for Columbus later in the period on a power play, batting in a rebounded puck from the doorstep.

Wheeler made it 2-1 Jets when he redirected Kulikov's point shot past Bobrovsky 35 seconds into the second period. Jones rifled in a slap shot from the top of the right circle later in the second for the Blue Jackets to tie the game again.

Wheeler's three in the third period slammed the door on Columbus.