Why this 110-year-old building in Brandon is being bulldozed 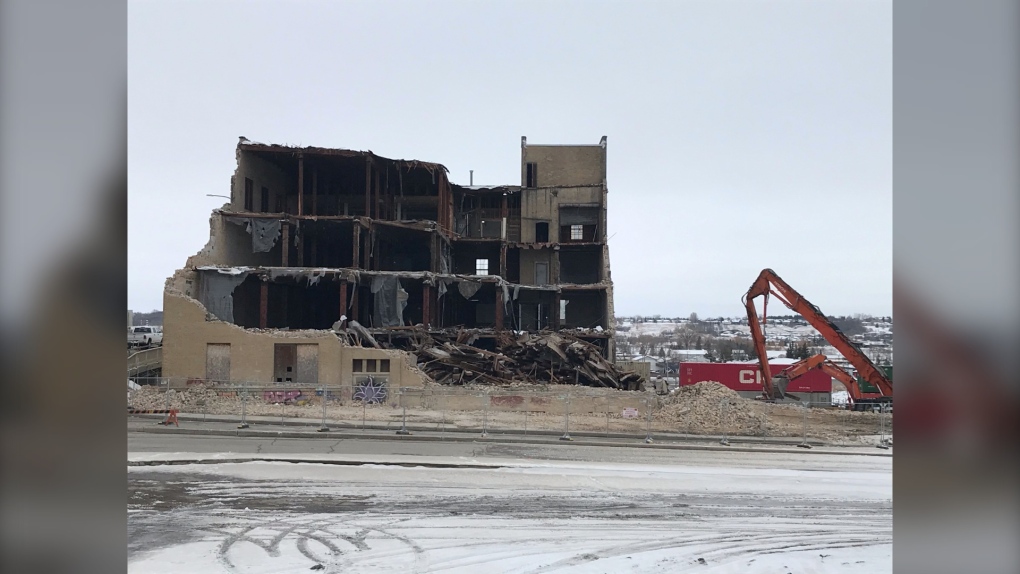 The demolition of the building began on April 7. (Source: Manitoba Infrastructure staff)

WINNIPEG -- The Manitoba government is demolishing a 110-year-old building as part of the redevelopment of the Daly Overpass in Brandon, Man.

“It’s going to be a really good addition to Brandon. It helps a lot with traffic flow,” said Infrastructure Minister Ron Schuler.

This redevelopment project includes a new four-lane bridge with a separate pedestrian and active transportation bridge, as well as on-and-off-ramps to connect 18th Street with Pacific Avenue, new pathways and upgrades to the sidewalk and pavement.

“It’s definitely a needed bridge… It goes over a major railway and I think that was always the complication of it,” Schuler said.

“Plus, there were buildings in its way that we had to purchase the land from and now we’re demolishing them.”

One of the buildings in the process of being demolished is the International Harvester Building, also known as the Kullberg’s building. This five-storey building was built in 1911 when a U.S. agricultural equipment manufacturer, International Harvester, established its Western Canadian headquarters in Brandon.

“That makes a lot of sense because, of course, Brandon was and is a centre of Prairie agriculture,” said Gordon Goldsborough, president of the Manitoba Historical Society.

Over its 110 years, the building was also used for a number of purposes, including as a warehouse, cold storage plant, processing plant for ducks and geese, and a furniture warehouse.

Goldsborough said the building has significance when it comes to the province’s agricultural history.

He said he thinks it’s a good thing the bridge is being built, but that it’s too bad it involves the demolition of the International Harvester Building.

Goldsborough added that this is one of the older buildings in the city, which has “a tangible connection to Brandon’s history as an agricultural hub.”

“When the choice was made to demolish this building, I was like ‘too bad’ because the bridge expansion could have gone the opposite direction. It could’ve gone on the west side of the present-day bridge and all we would’ve lost then is a fairly modern building,” Goldsborough said.

Goldsborough said about a year ago that the Manitoba Historical Society issued a list of the top ten most endangered structures in the province, with the International Harvester Building being one of them.

He said they had hoped this list would galvanize local action, but that didn’t happen.

“The interests of Brandonites are more in favour on bridges than preserving its history,” Goldsborough said.

Schuler said in recent times the province has been getting a lot of pushback on different issues, but that has not been the case for this demolition.

“I have not seen one single letter or document cross my desk where anybody opposed the taking down of the Kullberg’s building,” the minister said.

“It’s actually one of the few things where there seems to be unanimity.”

Schuler noted the building is a landmark, but that people understand that it had outlived its usefulness.

“I think people in Brandon understand that we want to have progress,” he said.

WHAT COULD HAVE BEEN?

Goldsborough noted that at one point there was a development company that was planning to develop the building into upscale condominiums.

“That to me is the ideal use for a building like this, because it would have made it a vital building,” he said, noting this plan didn’t end up happening.

He added that he would also have liked to see the building turned into a museum of agriculture.

“Brandon is the Wheat City. Its whole public persona is as a centre of agriculture on the Prairies,” Goldsborough said.

“What better place to have a museum of agriculture?”

HOW IS IT BEING PRESERVED?

Schuler said they are giving the Brandon General Museum and Archives a few bricks from the site.

“I know they went through and they picked up a couple of artifacts from there as well, just to commemorate the building,” he said, noting the building didn’t have any architectural features that could be incorporated into the bridge.

The demolition of the building began on April 7, and on April 12 Pacific Avenue was closed out of caution.

The province hopes to have the entire building down by April 21 and then have everything cleaned up by May 7.