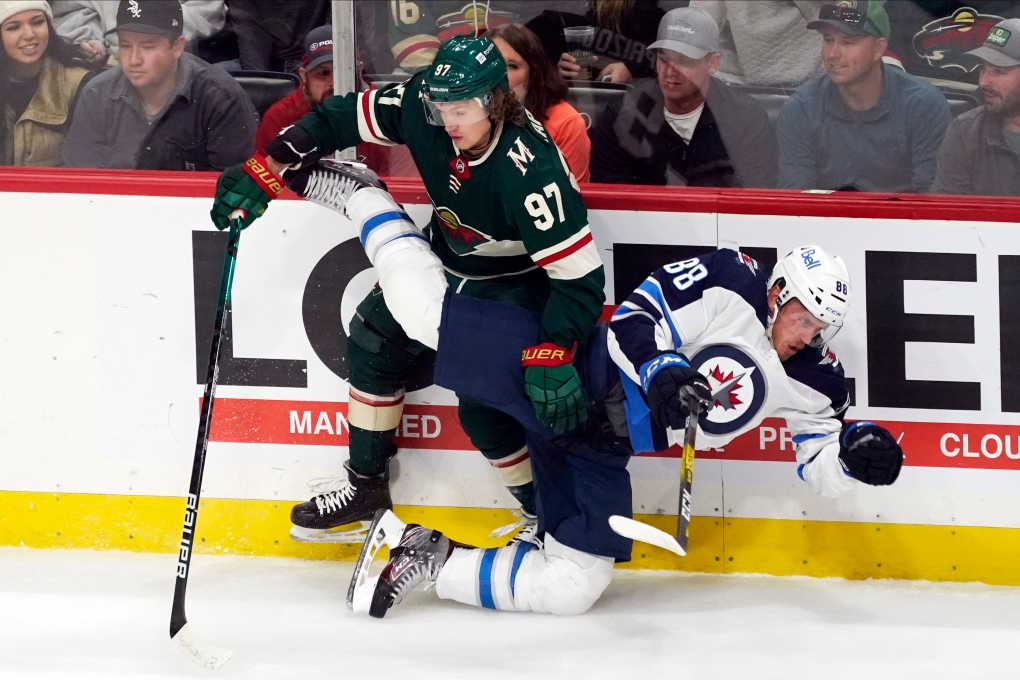 Joel Eriksson Ek had a hat trick for Minnesota, tying the game with 59 seconds remaining in regulation and winning it on a power play in overtime to stun the Winnipeg Jets 6-5 in a raucous home opener for the Wild on Tuesday night.
ST. PAUL, Minn. -

Joel Eriksson Ek had a hat trick for Minnesota, tying the game with 59 seconds remaining in regulation and winning it on a power play in overtime to stun the Winnipeg Jets 6-5 in a raucous home opener for the Wild on Tuesday night.

Eriksson Ek, who signed an eight-year, $42 million contract this summer, scored the equalizer just 15 seconds after an empty-netter by Jets center Mark Scheifele was wiped out by an offside call that came from a replay challenge by Minnesota.

Instead of taking a two-goal lead to the locker room, the Jets were suddenly on their heels as the Wild finished the third period with an 18-5 shots advantage.

Josh Morrissey was called for holding Kirill Kaprizov near the midpoint of overtime, giving the Wild a 4-on-3. Eriksson Ek scored on a 3-on-1 rush to beat Connor Hellebuyck, who has given up 14 goals in three losses to start the season.

Hellebuyck stopped 38 shots on a rough night for the goalies. Cam Talbot made 25 saves for the Wild, none bigger than the denial of Logan Stanley on a 2-on-1 right before Eriksson Ek's winner.

Mats Zuccarello had two goals and two assists, Marcus Foligno scored on a power play with 4:58 left in regulation and Kaprizov had three assists for the Wild in this spirited renewal of the Central Division rivalry with the Jets.

Kyle Connor had two goals and an assist to fuel an eight-point night for Winnipeg's new first line without captain Blake Wheeler, who tested positive for COVID-19 and will miss at least three more games. Andrew Copp, who took Wheeler's place at right wing, added a goal and two assists and Mark Scheifele notched two assists.

Pierre-Luc Dubois had the tiebreaking goal early in the third period and Morrissey also scored for Winnipeg, which lost leads of 1-0, 2-1, 3-2 and 5-3.

The first game between these teams in 653 days was as feisty and frenetic as ever, as if both sides were trying to make up for the lost time to the pandemic-tailored 2020-21 season that had the Jets facing only Canadian teams.

The Wild are playing at a faster pace now, with the reigning rookie of the year Kaprizov their new star after the buyouts of franchise anchors Zach Parise and Ryan Suter. With help from their not-so-gracious guests, they gave the fans in their first full house in 19 months quite a show.

Kaprizov was penalized for roughing halfway through a Wild power play in the first period, and as soon as he returned from the box he began tussling with Dubois.

Right after Eriksson Ek sneaked a wraparound past Hellebuyck to tie the game at 2 shortly before the first intermission, Foligno and Brenden Dillon dropped the gloves. Foligno used a kung-fu-style jump kick to jump start the fight and skated off the ice to a rousing ovation.

Zuccarello was credited with the strangest goal of the game when an ill-fated poke check by Hellebuyck caused the puck to glance off Morrissey and tie the game at 3 late in the second period. The Wild nearly took the lead in the closing seconds when Jonas Brodin's whack was smothered by Hellebuyck's stomach. Ryan Hartman pushed it in, but the officials ruled the play dead and disallowed the goal.

The Jets play Anaheim on Thursday in their home opener.

The Wild host Anaheim on Saturday, as the Ducks wrap up a four-game trip.